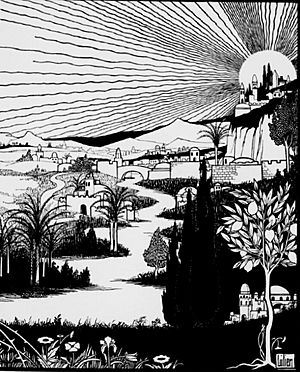 A painting of Zion by Ephraim Moshe Lilien

Zion, is one of the seventy names of Jerusalem, and in the Bible is the second name for Jerusalem after the name "Jerusalem". The name "Zion" originally revolves around a certain area in the city. It is customary to delineate the site in the eastern and southern part of Jerusalem during the Second Temple period, including the City of David, the Ophel and Mount Moriah.

All content from Kiddle encyclopedia articles (including the article images and facts) can be freely used under Attribution-ShareAlike license, unless stated otherwise. Cite this article:
Zion Facts for Kids. Kiddle Encyclopedia.