City of David facts for kids 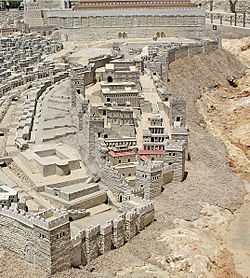 The Biblical City of David in the period of Herod's Temple, from the Holyland Model of Jerusalem. The southern wall of the Temple Mount appears at top.

The site is attributed to the palace of king David, and includes a water tunnel that was built by the king Hezekiah. The site of the Gihon Spring and Pool of Siloam are incorporated in an archaeological park open to the public. Visitors can wade through the Siloam Tunnel, through which the waters of the ancient spring still flow.

It is best known for its Iron Age structures attributed to Judean kings, and it also contains older Canaanite infrastructure dated to the Middle Bronze Age.

All content from Kiddle encyclopedia articles (including the article images and facts) can be freely used under Attribution-ShareAlike license, unless stated otherwise. Cite this article:
City of David Facts for Kids. Kiddle Encyclopedia.