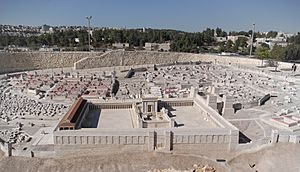 The Holyland Model of Jerusalem is a model of Old City of Jerusalem from the period of the Second Temple. It was first held in the Holyland Hotel in Jerusalem. It was opened in 1966, together with other models of ancient structure models of Israel. In 2006 the model was moved to a new site in the Israel Museum.

All content from Kiddle encyclopedia articles (including the article images and facts) can be freely used under Attribution-ShareAlike license, unless stated otherwise. Cite this article:
Holyland Model of Jerusalem Facts for Kids. Kiddle Encyclopedia.