Herod the Great facts for kids 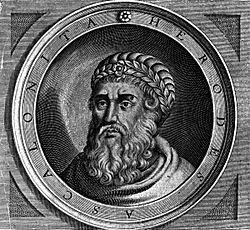 Image of Herod the Great

Herod I (c.73/75–4 BC), also known as Herod the Great, was the King of Judea from 37 to 4 BC. At the time Judea was a client state of Rome. During his 33 year reign, Herod was an excellent administrator.

Herod was born about 73–75 BC. He was the son of Antipater the Idumaean and his wife Cyprus, the daughter of an Arabian sheik. Both Herod's grandfather and his father were political officials in Judea. Both had close ties to the Romans. When Antipater came to the aid of Julius Caesar after the Battle of Pharsalus in 48 BC, Caesar made Antipater the governor of Judea. In 47 BC Antipater made his oldest son, phasael, the governor of Jerusalem. He made Herod governor of Galilee. As governor, Herod won favor with the Romans by his dealing with hostile revolts. At the same time his actions were censured by the Great Sanhedrin.

Herod was friends with Octavian and Mark Antony who in 40 BC had the Roman Senate designate Herod as the next king of Judea. Herod traveled to the Temple of Jupiter to give thanks to the gods of Rome. When the king of Judea was killed in 37 BC, Herod became the de facto king.

During Herod's early years as king, Mark Antony's relationship with Cleopatra allowed the Egyptian queen to keep taking small parts of Herod's kingdom. When Octavian defeated Antony and Cleopatra at the Battle of Actium in 31 BC, Herod made a new alliance with Octavian. He gained a reputation for his harsh taxes but was able to keep the peace in the region. He sent expensive gifts to Rome but did not have to pay tribute. By 30 BC, he had regained all the territory Cleopatra and the Hasmoneans had taken. He expanded his rule into northern Galilee and resettled several areas. By giving extravagant gifts to Athens and supporting the Olympic Games he increased the status of Judea in the Mediterranean world.

Herod saw himself as the perfect example of a refined king even if Bible writers saw him as a tyrant. He became completely involved in Greco-Roman history, culture and philosophy. At the same time he began neglecting the affairs of state and the study of Halakha (Jewish law). He needed the consent of the Pharisees in order to rule so he kept trying to gain their approval in a number of ways. He never won them over completely. When he built the Caesarea Maritima (22–10 BC) in honor of his patron Caesar Augustus, the pagan symbols decorating his cities upset the Jewish leaders. He organized fights between gladiators every five years, which further upset the Jewish leaders. In 20 BC, Herod turned his attention to building the Second Temple, also called Herod's Temple. While Herod wanted the temple to be the crowning monument to the Jewish faith, he used Greek architects. He allowed moneylenders to operate in the temple courtyard which angered many Jews.

His greatest religious scandal was digging up King David's Tomb to find the treasure it was rumored to contain. He had spent great sums of money on his other projects and thought that by secretly robbing the tomb he could profit from any treasure he found there. But on opening the tomb, there was no treasure.

He rebuilt the fortresses at Masada and Herodium. After a severe earthquake in 31 BC, he built a new market, a new amphitheater and a new building for the Sanhedrin. He built a new royal palace for himself. He also improved the water supply for Jerusalem.

All content from Kiddle encyclopedia articles (including the article images and facts) can be freely used under Attribution-ShareAlike license, unless stated otherwise. Cite this article:
Herod the Great Facts for Kids. Kiddle Encyclopedia.