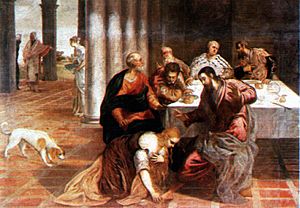 Jesus at the house of the Pharisean, by Jacopo Tintoretto, Escorial

Pharisees were Jewish leaders who composed and enforced religious law at a certain period in Jewish history. At times, the Pharisees were a political party, a social movement, and a school of thought. After the destruction of the Second Temple in 70 AD, Pharisaic beliefs became the foundation for Rabbinic Judaism. The term 'Judaism' today almost always refers to Rabbinic Judaism.

Paul of Tarsus, disciple of Jesus, was a Pharisee prior to his religious conversion to Christianity.

All content from Kiddle encyclopedia articles (including the article images and facts) can be freely used under Attribution-ShareAlike license, unless stated otherwise. Cite this article:
Pharisees Facts for Kids. Kiddle Encyclopedia.