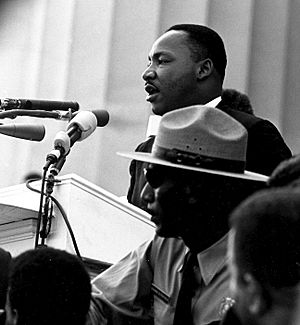 Martin Luther King Jr. was a leader in the Civil Rights Movement, one of the most famous social movements of the 20th century.

The term social movement refers to action by groups, individuals or organizations focusing over political or social matters. In particular, the movement wants to resist or undo certain change. A reform movement is one seeking to change laws and normals. Trade unions represent rights to abortion, LGBT and workers rights.

All content from Kiddle encyclopedia articles (including the article images and facts) can be freely used under Attribution-ShareAlike license, unless stated otherwise. Cite this article:
Social movement Facts for Kids. Kiddle Encyclopedia.