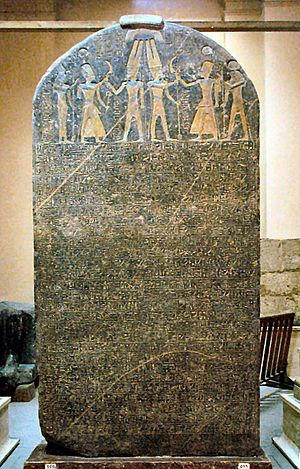 Israelites were a Semitic people of the ancient Middle East. They lived in part of what was Canaan during the time of the Bible. This area came to be called the Land of Israel. It usually refers to a member of one of the Tribes of Israel. The term Children of Israel is also used, especially when talking about the period of the Five Books of Moses.

Israelites lived in the kingdom of Israel, in areas where the modern State of Israel is now. Israel split off from a kingdom called Judah, whose people were later called Jews. Israel was conquered by the Assyrians in 721 BCE. Judah was conquered by the Babylonians in 586 BCE. Many Jews were taken away from Judah. When the Achaemenid Empire defeated the Babylonians they let the Jews return to rebuild the Second Temple in Jerusalem about 70 years later.

In the Hebrew Bible, the term Israelites is used interchangeably with the term Twelve Tribes of Israel.

All content from Kiddle encyclopedia articles (including the article images and facts) can be freely used under Attribution-ShareAlike license, unless stated otherwise. Cite this article:
Israelite Facts for Kids. Kiddle Encyclopedia.