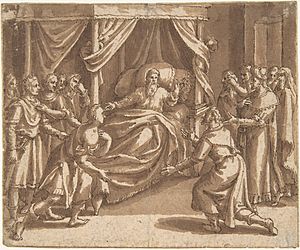 The Twelve Tribes of Israel are, according to Judeo-Christian texts, the descendants of the Biblical patriarch Jacob, also known as Israel, through his twelve sons by various women, who collectively form the Israelite nation. Within ancient Judaism, one's tribal affiliation had a great impact on their practices and opportunities, as some tribes enjoyed privileges others did not and some tribes received more blessings than others.

Jacob, later called Israel, was the second-born son of Isaac and Rebecca, the younger twin brother of Esau, and the grandson of Abraham and Sarah. According to Biblical texts, he was chosen by Yahweh to be the patriarch of the Israelite nation. From what is known of Jacob, he had two wives, sisters Leah and Rachel, and two mistresses, sisters Bilhah and Zilpah, by whom he had at least thirteen children. Though it is possible he may have had more sons and daughters than what is recorded in surviving texts, only twelve sons would form the basis for the twelve tribes of Israel: Reuben, Simeon, Levi, Judah, Issachar, Zebulun, Joseph, Benjamin, Dan, Naphtali, Gad, and Asher. Jacob was known to display favoritism among his children, particularly for Joseph and Benjamin, the sons of his favorite wife, Rachel, and so, the tribes themselves were not treated equally in a divine sense. Joseph, despite being the second-youngest son, received double the inheritance of his brothers, treated as if he were the firstborn son instead of Reuben, and so, his tribe was later split into two tribes, named for his sons, Ephraim and Manasseh. 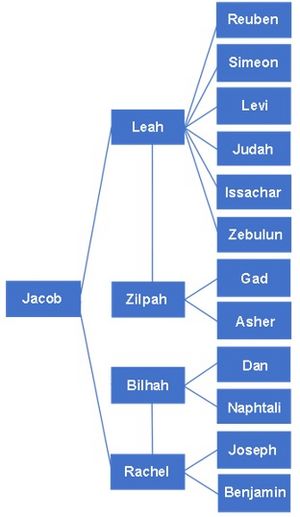 The Israelites were the twelve sons of the biblical patriarch Jacob. Jacob also had one daughter, Dinah, whose descendants were not recognized as a separate tribe. The sons of Jacob were born in Padan-aram from different mothers, as follows:

Jacob elevated the descendants of Ephraim and Manasseh (the two sons of Joseph and his Egyptian wife Asenath) to the status of full tribes in their own right due to Joseph receiving a double portion after Reuben lost his birth right because of his transgression with Bilhah.

In the biblical narrative, the period from the conquest of Canaan under the leadership of Joshua until the formation of the United Kingdom of Israel passed with the tribes forming a loose confederation, described in the Book of Judges. Modern scholarship has called into question the beginning, middle, and end of this picture and the account of the conquest under Joshua has largely been abandoned. The Bible's depiction of the 'period of the Judges' is widely considered doubtful. The extent to which a united Kingdom of Israel ever existed is also a matter of ongoing dispute.

Living in exile in the sixth century BCE, the prophet Ezekiel has a vision for the restoration of Israel, of a future in which the twelve tribes of Israel are living in their land again. 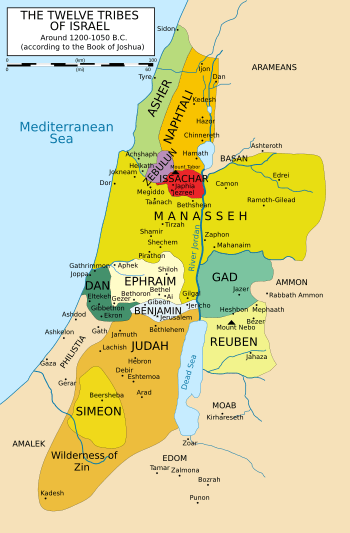 Map of the Twelve Tribes of Israel

The Land of Israel was divided into twelve sections corresponding to the twelve tribes of Israel. However, the tribes receiving land differed from the biblical tribes. The Tribe of Levi had no land appropriation but had six Cities of Refuge under their administration as well as the Temple in Jerusalem. There was no land allotment for the Tribe of Joseph, but Joseph's two sons, Ephraim and Manasseh, received their father's land portion.

Thus the tribes receiving an allotment were: 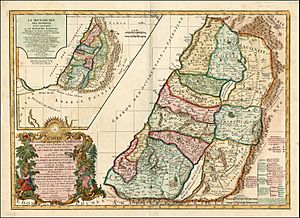 Map of tribal territories in the Land of Israel (Charles François Delamarche, 1797)

All content from Kiddle encyclopedia articles (including the article images and facts) can be freely used under Attribution-ShareAlike license, unless stated otherwise. Cite this article:
Twelve Tribes of Israel Facts for Kids. Kiddle Encyclopedia.