Canaan was an ancient country in the Levant. In the Bible, it was the land promised to Abraham and his children by God. The Canaanite people lived in this area from about 2000 BCE until the time of the Bible. It covers part of the area that is now Israel, Palestine, Syria and Lebanon. 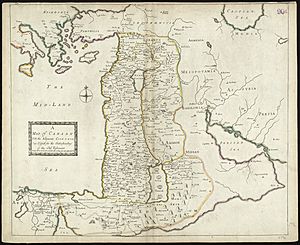 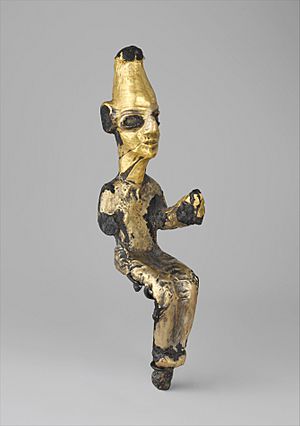 Canaan included what today are Lebanon, Israel, northwestern Jordan, and some western areas of Syria. According to archaeologist Jonathan N. Tubb, "Ammonites, Moabites, Israelites, and Phoenicians undoubtedly achieved their own cultural identities, and yet ethnically they were all Canaanites", "the same people who settled in farming villages in the region in the 8th millennium BC."

Canaanite civilization was a response to long periods of stable climate interrupted by short periods of climate change. During these periods, Canaanites profited from their intermediary position between the ancient civilizations of the Middle East—Ancient Egypt, Mesopotamia (Sumer, Akkad, Assyria, Babylonia), the Hittites, and Minoan Crete—to become city states of merchant princes along the coast, with small kingdoms specializing in agricultural products in the interior. This polarity, between coastal towns and agrarian hinterland, was illustrated in Canaanite mythology by the struggle between the storm god, variously called Teshub (Hurrian) or Ba'al Hadad (Semitic Amorite/Aramean) and Ya'a, Yaw, Yahu, or Yam, god of the sea and rivers. Early Canaanite civilization was characterized by small walled market towns, surrounded by peasant farmers growing a range of local horticultural products, along with commercial growing of olives, grapes for wine, and pistachios, surrounded by extensive grain cropping, predominantly wheat and barley. Harvest in early summer was a season when transhumance nomadism was practiced—shepherds staying with their flocks during the wet season and returning to graze them on the harvested stubble, closer to water supplies in the summer. Evidence of this cycle of agriculture is found in the Gezer calendar and in the biblical cycle of the year. 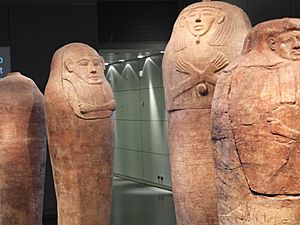 Periods of rapid climate change generally saw a collapse of this mixed Mediterranean farming system; commercial production was replaced with subsistence agricultural foodstuffs; and transhumance pastoralism became a year-round nomadic pastoral activity, whilst tribal groups wandered in a circular pattern north to the Euphrates, or south to the Egyptian delta with their flocks. Occasionally, tribal chieftains would emerge, raiding enemy settlements and rewarding loyal followers from the spoils or by tariffs levied on merchants. Should the cities band together and retaliate, a neighbouring state intervene or should the chieftain suffer a reversal of fortune, allies would fall away or intertribal feuding would return. It has been suggested that the Patriarchal tales of the Bible reflect such social forms. During the periods of the collapse of Akkadian Empire in Mesopotamia and the First Intermediate Period of Egypt, the Hyksos invasions and the end of the Middle Bronze Age in Assyria and Babylonia, and the Late Bronze Age collapse, trade through the Canaanite area would dwindle, as Egypt, Babylonia, and to a lesser degree Assyria, withdrew into their isolation. When the climates stabilized, trade would resume firstly along the coast in the area of the Philistine and Phoenician cities. As markets redeveloped, new trade routes that would avoid the heavy tariffs of the coast would develop from Kadesh Barnea, through Hebron, Lachish, Jerusalem, Bethel, Samaria, Shechem, Shiloh through Galilee to Jezreel, Hazor, and Megiddo. Secondary Canaanite cities would develop in this region. Further economic development would see the creation of a third trade route from Eilath, Timna, Edom (Seir), Moab, Ammon, and thence to the Aramean states of Damascus and Palmyra. Earlier states (for example the Philistines and Tyrians in the case of Judah and Samaria, for the second route, and Judah and Israel for the third route) tried generally unsuccessfully to control the interior trade.

Eventually, the prosperity of this trade would attract more powerful regional neighbours, such as Ancient Egypt, Assyria, the Babylonians, Persians, Ancient Greeks, and Romans, who would control the Canaanites politically, levying tribute, taxes, and tariffs. Often in such periods, thorough overgrazing would result in a climatic collapse and a repeat of the cycle (e.g., PPNB, Ghassulian, Uruk, and the Bronze Age cycles already mentioned). The fall of later Canaanite civilization occurred with the incorporation of the area into the Greco-Roman world (as Iudaea province), and after Byzantine times, into the Muslim Arab and proto-Muslim Umayyad Caliphate. Western Aramaic, one of the two lingua francas of Canaanite civilization, is still spoken in a number of small Syrian villages, whilst Phoenician Canaanite disappeared as a spoken language in about 100 AD. A separate Akkadian-infused Eastern Aramaic is still spoken by the existing Assyrians of Iraq, Iran, northeast Syria, and southeast Turkey.

Tel Kabri contains the remains of a Canaanite city from the Middle Bronze Age (2000–1550 BC). The city, the most important of the cities in the Western Galilee during that period, had a palace at its center. Tel Kabri is the only Canaanite city that can be excavated in its entirety because after the city was abandoned, no other city was built over its remains. It is notable because the predominant extra-Canaanite cultural influence is Minoan; Minoan-style frescoes decorate the palace.

All content from Kiddle encyclopedia articles (including the article images and facts) can be freely used under Attribution-ShareAlike license, unless stated otherwise. Cite this article:
Canaan Facts for Kids. Kiddle Encyclopedia.