Akkadian Empire in time of Sargon I 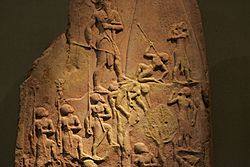 Akkad (Sumerian: Agade, Bible: Accad) was an ancient city in Mesopotamia. It was the centre of the Akkadian Empire. The ruins have not been found, but it is believed to be on the River Euphrates. The empire comes after a long relationship with Sumer, and before the ethnic Akkadian empires of Babylonia and Assyria.

According to the Sumerian king list, Akkad (Agade) was built by Sargon of Akkad, 23th century BC, and is often called the first empire in history. Even so, it is known from older cuneiform writings that the city was already there before Sargon, in the time of the kings of Uruk. According to the Bible (Genesis 10:10), it was one of the cities started by Nimrod. Also, in the earliest records, when Mesopotamian kings started calling themselves "lord of the four quarters" around Sumer, these were listed as: Martu, Shubar, Elam, and Uri-ki.

As the capital city of the Akkadian Empire beginning with Sargon, the city ruled from around 2300 to 2215 BC, when it was destroyed by the Gutians who invaded from the mountains.

Sargon conquered many of the surrounding regions. He created an empire which reached as far as the Mediterranean Sea and Anatolia, and extended his rule to Elam, and as far south as Oman. He ruled over this area for 56 years. Trade extended from the silver mines of Anatolia to the lapis lazuli mines in Afghanistan, the cedars of Lebanon and the copper of Oman. This consolidation of the city-states of Sumer and Akkad reflected the growing economic and political power of Mesopotamia. The empire's breadbasket was the rain-fed agricultural system of northern Mesopotamia and a chain of fortresses was built to control the imperial wheat production.

Images of Sargon were erected on the shores of the Mediterranean, in token of his victories, and cities and palaces were built at home with the spoils of the conquered lands. Elam and the northern part of Mesopotamia (Subartu) were also subjugated and rebellions in Sumer were put down. Contract tablets have been found dated in the years of the campaigns against Canaan and against Sarlak, king of Gutium.

During the 3rd millennium BC, an intimate cultural symbiosis developed between the Sumerians and the Akkadians, which included widespread bilingualism. Akkadian gradually replaced Sumerian as the spoken language of Mesopotamia somewhere around the turn of the 3rd and the 2nd millennium BC (the exact dating being a matter of debate), but Sumerian continued to be used as a sacred, ceremonial, literary and scientific language in Mesopotamia until the 1st century AD.

Collapse of the Empire

The fall of the empire established by Sargon seems to have been as sudden as its rise, and little is known about the Gutian period. From the fall of Akkad ca. 2083 BC until the Sumerian renaissance ca. 2050 BC, there is much that is still dark. It has recently been suggested that the regional decline at the end of the Akkadian period (and also in the Ancient Egyptian Old Kingdom) was associated with rapidly increasing aridity, and failing rainfall in the region of the Ancient Near East.

All content from Kiddle encyclopedia articles (including the article images and facts) can be freely used under Attribution-ShareAlike license, unless stated otherwise. Cite this article:
Akkad Facts for Kids. Kiddle Encyclopedia.