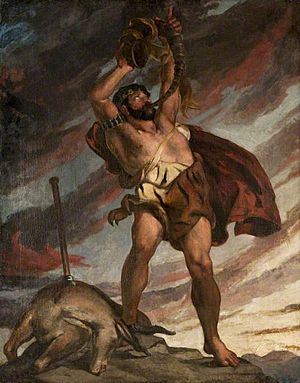 Nimrod (Hebrew: נִמְרוֹד) according to the Bible was the son of Cush, grandson of Ham and a "mighty hunter before the Lord" who built cities at Akkad, Erech (Uruk), and Babel. According to many legends, and as told by the Jewish historian Flavius Josephus, he became an evil tyrant who forced all his subjects to bake bricks for the Tower of Babel.

All content from Kiddle encyclopedia articles (including the article images and facts) can be freely used under Attribution-ShareAlike license, unless stated otherwise. Cite this article:
Nimrod Facts for Kids. Kiddle Encyclopedia.