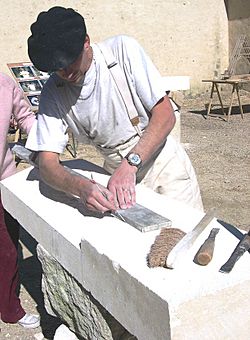 A French stonemason using a straightedge and chisels

Stonemasonry is the craft of making things out of stone. People who do this are called stonemasons. Their crafts have existed since the start of civilization. They have made important buildings and structures out of stone. This stone comes from the earth.

Stone has been used to build many long-lasting things. These could be monuments, artifacts, cathedrals and cities. These can often be seen in many cultures. Some monuments made out of stone include, the Egyptian pyramids and the Greek Parthenon. Stonehenge is also a famous stone building.

Masonry is the craft of shaping rough pieces of rock into accurate geometrical shapes, at times simple, but some of considerable complexity, and then arranging the resulting stones, often together with mortar, to form structures. 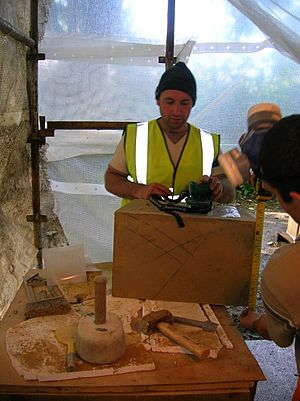 The basic tools, methods and skills of the banker mason have existed as a trade for thousands of years.

The modern stonemason undergoes comprehensive training, both in the classroom and in the working environment. Hands-on skill is complemented by intimate knowledge of each stone type, its application and best uses, and how to work and fix each stone in place. The mason may be skilled and competent to carry out one or all of the various branches of stonemasonry. In some areas the trend is towards specialization, in other areas towards adaptability. 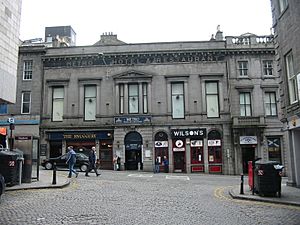 Stonemasons use all types of natural stone: igneous, metamorphic and sedimentary; while some also use artificial stone as well.

Types of stonemasonry are:

Fixer masons
This type of masons have specialized into fixing the stones onto the buildings. They might do this with grouts, mortars and lifting tackle. They might also use things like single application specialized fixings, simple cramps, and dowels as well as stone cladding with things like epoxy resins, mastics and modern cements.
Memorial masons
These are the masons that make headstones and carve the inscriptions on them.

Today's stonemasons undergo training that is quite comprehensive and is done both in the work environment and in the classroom. It isn't enough to have hands-on skill anymore. One must also have knowledge of the types of stones as well as its best uses and how to work it as well as how to fix it in place.

Rubble masonry
When roughly dressed stones are laid in a mortar the result is a stone rubble masonry.
Ashlar masonry
Stone masonry using dressed (cut) stones is known as ashlar masonry.
Stone veneer
Stone veneer is used as a protective and decorative covering for interior or exterior walls and surfaces. The veneer is typically 1 inch (2.54 cm) thick and must weigh less than 15 lb per square foot (73 kg m−2) so that no additional structural supports are required. The structural wall is put up first, and thin, flat stones are mortared onto the face of the wall. Metal tabs in the structural wall are mortared between the stones to tie everything together, to prevent the stonework from separating from the wall.
Slipform stonemasonry
Slipform stonemasonry is a method for making stone walls with the aid of formwork to contain the rocks and mortar while keeping the walls straight. Short forms, up to two feet tall, are placed on both sides of the wall to serve as a guide for the stone work. Stones are placed inside the forms with the good faces against the form work. Concrete is poured behind the rocks. Rebar is added for strength, to make a wall that is approximately half reinforced concrete and half stonework. The wall can be faced with stone on one side or both sides.

A modern apprenticeship lasts three years. This combines on-site learning through personal experience, the experience of the tradesmen and college work where apprentices are given an overall experience of the building, hewing and theory work involved in masonry. In some areas colleges offer courses which teach not only the manual skills but also related fields such as drafting and blueprint reading or construction conservation. Electronic Stonemasonry training resources enhance traditional delivery techniques. Hands-on workshops are a good way to learn about stonemasonry also. Those wishing to become stonemasons should have little problem working at heights, possess reasonable hand-eye co-ordination, be moderately physically fit, and have basic mathematical ability. Most of these things can be developed while learning. 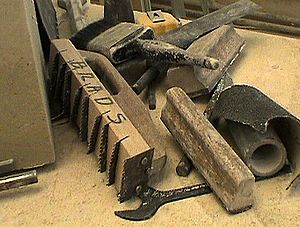 The foreground tool with serrated blades is a stonemason's French drag, used on soft limestone

Stonemasons use a wide variety of tools to handle and shape stone blocks (ashlar) and slabs into finished articles. The basic tools for shaping the stone are a mallet, chisels, and a metal straight edge. With these one can make a flat surface – the basis of all stonemasonry.

Chisels come in a variety of sizes and shapes, dependent upon the function for which they are being used and have many different names depending on locality. There are different chisels for different materials and sizes of material being worked, for removing large amounts of material and for putting a fine finish on the stone.

Mixing mortar is normally done today with mortar mixers which usually use a rotating drum or rotating paddles to mix the mortar.

The masonry trowel is used for the application of the mortar between and around the stones as they are set into place. Filling in the gaps (joints) with mortar is referred to as pointing. Pointing in smaller joints can be accomplished using tuck pointers, pointing trowels, and margin trowels, among other tools.

A mason's hammer has a long thin head and is called a Punch Hammer. It would be used with a chisel or splitter for a variety of purposes

A walling hammer (catchy hammer) can be used in place of a hammer and chisel or pincher to produce rubble or pinnings or snecks.

Stonemasons use a lewis together with a crane or block and tackle to hoist building stones into place.

Today power tools such as compressed-air chisels, abrasive spinners and angle grinders are much used: these save time and money, but are hazardous and require just as much skill as the hand tools that they augment. But many of the basic tools of stonemasonry have remained virtually the same throughout vast amounts of time, even thousands of years, for instance when comparing chisels that can be bought today with chisels found at the pyramids of Giza the common sizes and shapes are virtually unchanged.

Stonemasonry is one of the earliest trades in civilization's history. During the time of the Neolithic Revolution and domestication of animals, people learned how to use fire to create quicklime, plasters, and mortars. They used these to fashion homes for themselves with mud, straw, or stone, and masonry was born.

The Ancients heavily relied on the stonemason to build the most impressive and long lasting monuments to their civilizations. The Egyptians built their pyramids, the civilizations of Central America had their step pyramids, the Persians their palaces, the Greeks their temples, and the Romans their public works and wonders (See Roman Architecture). People of the Indus Valley Civilization, such as at Dholavira made entire cities characterized by stone architecture. Among the famous ancient stonemasons is Sophroniscus, the father of Socrates, who was a stone-cutter.

Castle building was an entire industry for the medieval stonemasons. When the Western Roman Empire fell, building in dressed stone decreased in much of Western Europe, and there was a resulting increase in timber-based construction. Stone work experienced a resurgence in the 9th and 10th centuries in Europe, and by the 12th century religious fervour resulted in the construction of thousands of impressive churches and cathedrals in stone across Western Europe. 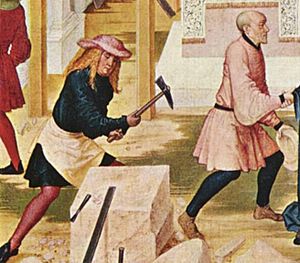 Medieval stonemasons' skills were in high demand, and members of the guild, gave rise to three classes of stonemasons: apprentices, journeymen, and master masons. Apprentices were indentured to their masters as the price for their training, journeymen were qualified craftsmen who were paid by the day, and master masons were considered freemen who could travel as they wished to work on the projects of the patrons and could operate as self-employed craftsmen and train apprentices. During the Renaissance, the stonemason's guild admitted members who were not stonemasons, and eventually evolved into the Society of Freemasonry; fraternal groups which observe the traditional culture of stonemasons, but are not typically involved in modern construction projects. 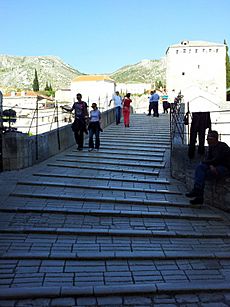 A medieval stonemason would often carve a personal symbol onto their block to differentiate their work from that of other stonemasons. This also provided a simple ‘quality assurance’ system.

The Renaissance saw stonemasonry return to the prominence and sophistication of the Classical age. The rise of the humanist philosophy gave people the ambition to create marvellous works of art. The centre stage for the Renaissance would prove to be Italy, where Italian city-states such as Florence erected great structures, including the Florence Cathedral, the Fountain of Neptune, and the Laurentian Library, which was planned and built by Michelangelo Buonarroti, a famous sculptor of the Renaissance.

When Europeans settled the Americas, they brought the stonemasonry techniques of their respective homelands with them. Settlers used what materials were available, and in some areas stone was the material of choice. In the first waves, building mimicked that of Europe, to eventually be replaced by unique architecture later on.

In the 20th century, stonemasonry saw its most radical changes in the way the work is accomplished. Prior to the first half of the century, most heavy work was executed by draft animals or human muscle power. With the arrival of the internal combustion engine, many of these hard aspects of the trade have been made simpler and easier. Cranes and forklifts have made moving and laying heavy stones relatively easy for the stonemasons. Motor powered mortar mixers have saved much in time and energy as well. Compressed-air powered tools have made working of stone less time-intensive. Petrol and electric powered abrasive saws can cut through stone much faster and with more precision than chiseling alone. Carbide-tipped chisels can stand up to much more abuse than the steel and iron chisels made by blacksmiths of old.

All content from Kiddle encyclopedia articles (including the article images and facts) can be freely used under Attribution-ShareAlike license, unless stated otherwise. Cite this article:
Stonemasonry Facts for Kids. Kiddle Encyclopedia.