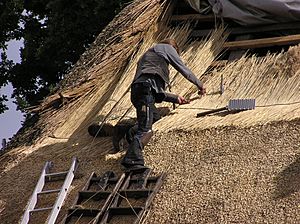 The profession of roofing is learned through apprenticeship in Germany. 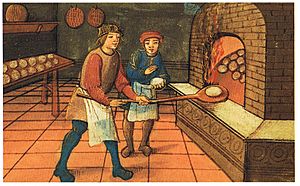 A medieval baker with his apprentice. The Bodleian Library, Oxford.

Apprenticeship is a system of training people who are learning how to do a job which needs special skill. Someone who is learning in this way is called an "apprentice". An apprentice will learn by working with someone who is already skilled at a job. They are like a teacher and pupil.

The system of apprenticeship has been used for many hundreds of years. In the late Middle Ages the craft guilds and town governments used to watch and control the system. A master craftsman had the right to employ young people to work for them and pay them a small salary. In return the apprentice would be learning the trade. Most apprentices were males, but female apprentices are more common nowadays, especially in crafts such as embroidery, silk-weaving etc..

All content from Kiddle encyclopedia articles (including the article images and facts) can be freely used under Attribution-ShareAlike license, unless stated otherwise. Cite this article:
Apprenticeship Facts for Kids. Kiddle Encyclopedia.