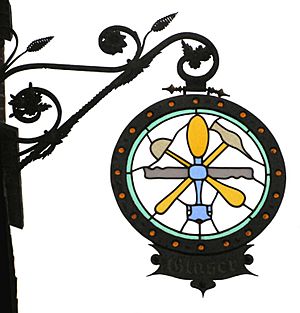 Traditional wrought iron guild sign of a glazier — in Germany. These signs can be found in many old European towns where guild members marked their places of business. Today they are newly created or even restored, especially in old town areas

A guild is an association of craftspeople or merchants who control the practice of their craft in a town.

Many groups of people started as guilds, including scholars, and religious guilds. Many modern organisations, like universities, started as guilds. However, the basic idea of a guild was to control the training and practice of a trade or business. In Europe, guilds were given authority by the monarch. New young members had to serve as apprentices to a master for a certain length of time (such as seven years). At the end they became full members of the guild, and could set up on their own, and take apprentices of their own. That is the way the European world worked up to and including the first part of the 20th century.

There were guilds of weavers and dyers in the wool trade, of masons and architects in the building trade. There were guilds of painters, blacksmiths, bakers, butchers, and so on. The Corporation of the City of London includes the "livery companies". These companies were originally guilds. The senior members of the livery companies choose the Lord Mayor of London, the sheriffs and certain other officers.

Guilds were common in the cities of the Middle Ages. After that, around 1700 to 1800 their influence lessened somewhat. Jean-Jacques Rousseau and Adam Smith were much opposed to the idea of guilds. They believed that guilds hindered economic development and free trade.

All content from Kiddle encyclopedia articles (including the article images and facts) can be freely used under Attribution-ShareAlike license, unless stated otherwise. Cite this article:
Guild Facts for Kids. Kiddle Encyclopedia.