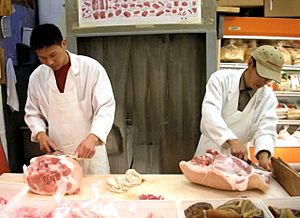 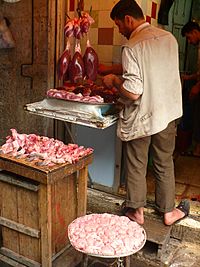 A butcher at work in Syria

A butcher is a person who may slaughter animals, dress their flesh, sell their meat or participate within any combination of these three tasks. They may prepare standard cuts of meat and poultry for sale in retail or wholesale food establishments. A butcher may be employed by supermarkets, grocery stores, butcher shops and fish markets, slaughter house, or may be self-employed.

An ancient trade, whose duties may date back to the domestication of livestock, butchers formed guilds in England as far back as 1272. Today, many jurisdictions offer trade certifications for butchers. Some areas expect a three-year apprenticeship followed by the option of becoming a master butcher. 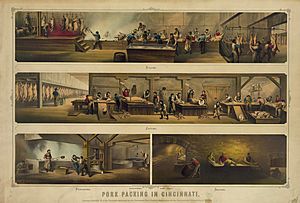 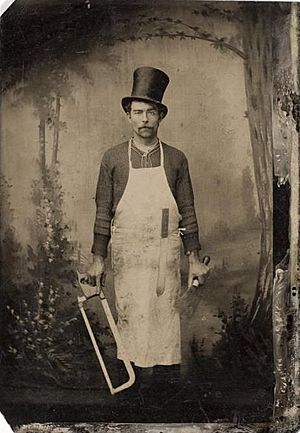 A butcher from the late 19th century

Butchery is a traditional line of work. In the industrialized world, slaughterhouses use butchers to slaughter the animals, performing one or a few of the steps repeatedly as specialists on a semiautomated disassembly line. The steps include stunning (rendering the animal incapacitated), exsanguination (severing the carotid or brachial arteries to facilitate blood removal), skinning (removing the hide or pelt) or scalding and dehairing (pork), evisceration (removing the viscera) and splitting (dividing the carcass in half longitudinally).

In parts of the world, it is common for butchers to perform many or all of the butcher's duties. Where refrigeration is less common, these skills are required to sell the meat of slaughtered animals.

A butcher at work in Syria

Some butchers sell their goods in specialized stores, commonly termed a butcher shop (American English), butchery (South African English) or butcher's shop (British English). Butchers at a butcher shop may perform primary butchery, but will typically perform secondary butchery to prepare fresh cuts of meat for sale. These shops may also sell related products, such as hot food(using their own meat products), food preparation supplies, baked goods and grocery items. Butcher shops can have a wider variety of animal types, meat cuts and quality of cuts. Additionally, butcher shops may focus on a particular culture, or nationality, of meat production. Some butcher shops, termed "meat delis", may also include a delicatessen.

In the United States and Canada, butcher shops are becoming less common because of the increasing popularity of supermarkets. Supermarkets employ butchers for secondary butchery, but in the United States even that role is diminished with the advent of "case-ready" meat, where the product is packaged for retail sale at the packinghouse or specialized central processing plants.

All content from Kiddle encyclopedia articles (including the article images and facts) can be freely used under Attribution-ShareAlike license, unless stated otherwise. Cite this article:
Butcher Facts for Kids. Kiddle Encyclopedia.