Jean-Jacques Rousseau, (1712 – 2 July 1778) was a famous French speaking philosopher. He was born in Geneva, Switzerland and always described himself as being Genevan. Rousseau lived in the 18th century during the Age of Enlightenment. His political ideology influenced the French Revolution and aided the development of nationalism and socialist theories.

Rousseau was also a composer, writing numerous books about music theory. Rousseau authored Confessions, an autobiography, one of the first of its kind. Many later philosophers were influenced by him. He wrote a novel Julie, ou la nouvelle Héloïse which was a best-seller and influenced 19th century writers of romanticism.

Rousseau believed that men were born good and innocent, and that corruption and sadness happened because of life experiences and experiences in society. He believed that if society was gone, man would be happy and pure once again.

Rousseau is most famous for his social contract ideology, which is often compared to the social contract of John Locke. This ideology is stated in Rousseau's book, The Social Contract.

During the period of the French Revolution, Rousseau was the most popular of the philosophes among members of the Jacobin Club. He was interred as a national hero in the Panthéon in Paris, in 1794, 16 years after his death. 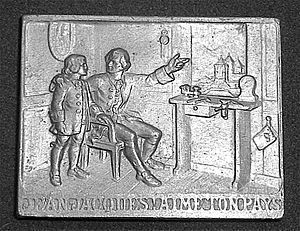 Rousseau's philosophy of education concerns itself not with particular techniques of imparting information and concepts, but rather with developing the pupil's character and moral sense, so that he may learn to practice self-mastery and remain virtuous even in the unnatural and imperfect society in which he will have to live. A child should be raised in the countryside, which, Rousseau believes, is a more natural and healthy environment than the city, under the guardianship of a tutor who would guide them through various learning experiences arranged by the tutor.

Today we would call this the disciplinary method of "natural consequences". Rousseau felt that children learn right and wrong through experiencing the consequences of their acts rather than through physical punishment. The tutor would make sure that no harm results to to the child through his learning experiences.

Rousseau became an early advocate of developmentally appropriate education; his description of the stages of child development mirrors his conception of the evolution of culture. He divides childhood into stages: 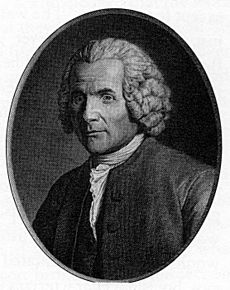 A portrait of Rousseau in later life

Rousseau recommends that the young adult learn a manual skill such as carpentry, which requires creativity and thought, will keep him out of trouble, and will supply a fallback means of making a living in the event of a change of fortune (the most illustrious aristocratic youth to have been educated this way may have been Louis XVI, whose parents had him learn the skill of locksmithing). Rousseau's ideas have influenced progressive "child-centered" education.

The Social Contract outlines the basis for a political order of classical republicanism. Published in 1762, it became one of the most influential works of political philosophy in the Western tradition. The treatise begins with the dramatic opening lines, "Man is born free, and everywhere he is in chains. Those who think themselves the masters of others are indeed greater slaves than they."

All content from Kiddle encyclopedia articles (including the article images and facts) can be freely used under Attribution-ShareAlike license, unless stated otherwise. Cite this article:
Jean-Jacques Rousseau Facts for Kids. Kiddle Encyclopedia.