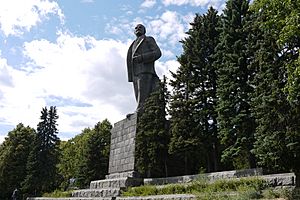 Civil religion is a concept that originated in French political thought and became a major topic for American sociologists since its use by Robert Bellah in the 1960s. It means the implicit religious values of a nation, as expressed through public rituals, symbols (such as the national flag) and ceremonies on sacred days and at sacred places (such as monuments, battlefields or national cemeteries). It stands outside the churches, although church officials and ceremonies are sometimes incorporated into the practice of civil religion. 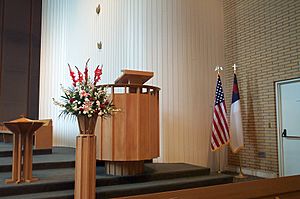 The Christian flag displayed alongside the flag of the USA next to the pulpit in a church in California.

Jean-Jacques Rousseau coined the term in chapter 8, book 4 of The Social Contract (1762), to describe what he regarded as the moral and spiritual foundation essential for any modern society. For Rousseau, civil religion was intended simply as a form of social cement, helping to unify the state by providing it with sacred authority. In his book, Rousseau outlines the simple dogmas of the civil religion:

Italian historian Emilio Gentile has studied the roots and development of the concept and proposed a division of two types of religions of politics: a civil religion and a political religion. 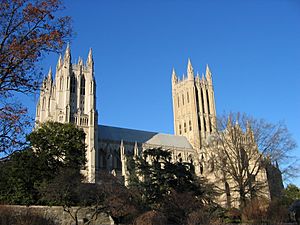 The Washington National Cathedral in Washington, D.C. is often used for state funerals for political leaders.

In the sociology of religion, civil religion is the folk religion of a nation or a political culture.

Civil religion stands somewhat above folk religion in its social and political status, since by definition it suffuses an entire society, or at least a segment of a society; and is often practiced by leaders within that society. On the other hand, it is somewhat less than an establishment of religion, since established churches have official clergy and a relatively fixed and formal relationship with the government that establishes them. Civil religion is usually practiced by political leaders who are laypeople and whose leadership is not specifically spiritual. 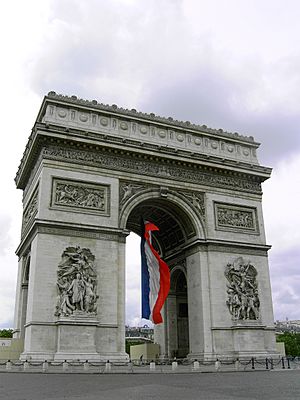 The Arc de Triomphe in Paris commemorates those who died in France's wars.

Professional commentators on political and social matters writing in newspapers and magazines sometimes use the term civil religion or civic religion to refer to ritual expressions of patriotism of a sort practiced in all countries, not always including religion in the conventional sense of the word.

Among such practices are the following:

All content from Kiddle encyclopedia articles (including the article images and facts) can be freely used under Attribution-ShareAlike license, unless stated otherwise. Cite this article:
Civil religion Facts for Kids. Kiddle Encyclopedia.