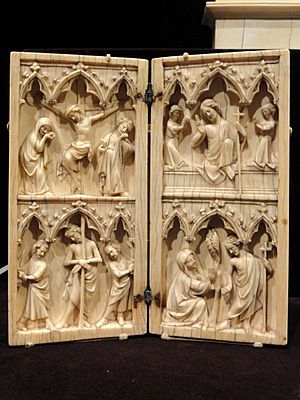 Scenes from the Passion and Afterlife of Christ, about 1330-1350 AD

The afterlife (also referred to as life after death) is the belief that the essential part of an individual's identity or the stream of consciousness continues after the death of the physical body.

According to various ideas about the afterlife, the essential aspect of the individual that lives on after death may be some partial element, or the entire soul or spirit, of an individual, which carries with it and may confer personal identity or, on the contrary, may not, as in Buddhist nirvana.

In some views, this continued existence often takes place in a spiritual realm, and in other popular views, the individual may be reborn into this world and begin the life cycle over again, likely with no memory of what they have done in the past, in this view, such rebirths and deaths may take place over and over again continuously until the individual gains entry to a spiritual realm or Otherworld.

Major views on the afterlife derive from religion, esotericism and metaphysics.

Some belief systems, such as those in the Abrahamic tradition, hold that the dead go to a specific plane of existence after death, as determined by God, or other divine judgment, based on their actions or beliefs during life.

In contrast, in systems of reincarnation, such as those in the Indian religions, the nature of the continued existence is determined directly by the actions of the individual in the ended life, rather than through the decision of a different being.

There are also those who do not believe that there is an afterlife, and that you simply cease to exist once you die. Atheism is based on refusal of the existence of a God and even an afterlife.

All content from Kiddle encyclopedia articles (including the article images and facts) can be freely used under Attribution-ShareAlike license, unless stated otherwise. Cite this article:
Afterlife Facts for Kids. Kiddle Encyclopedia.