In philosophical, theological, or moral discussions, corruption is spiritual or moral impurity or deviation from an ideal. In economy, corruption is payment for services or material which the recipient is not due, under law. This may be called bribery or kickback. In government it is when an elected representative makes decisions that are influenced by vested interest rather than their own personal or party ideological beliefs. 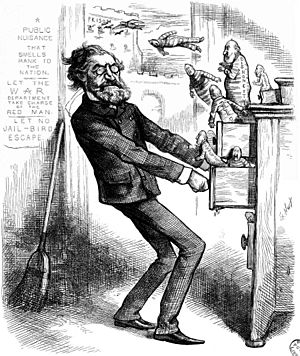 A political cartoon from Harper's Weekly, January 26, 1878, depicting U.S. Secretary of the Interior Carl Schurz investigating the Indian Bureau at the U.S. Department of the Interior

Political corruption is the abuse of public power, office, or resources by elected government officials for personal gain, e.g. by extortion, soliciting or offering bribes. It can also take the form of office holders maintaining themselves in office by purchasing votes by enacting laws which use taxpayer money. Systemic corruption is the complete subversion of a political or economic system.

Police corruption is a specific form of police misconduct designed to obtain financial benefits, other personal gain, and/or career advancement for a police officer or officers in exchange for not pursuing, or selectively pursuing, an investigation or arrest. One common form of police corruption is soliciting and/or accepting bribes in exchange for not reporting illegal activities.

Another example is police officers flouting the police code of conduct in order to secure convictions of suspects — for example, through the use of falsified evidence. More rarely, police officers may deliberately and systematically participate in organized crime themselves. In most major cities, there are internal affairs sections to investigate suspected police corruption or misconduct. Similar entities include the British Independent Police Complaints Commission.

All content from Kiddle encyclopedia articles (including the article images and facts) can be freely used under Attribution-ShareAlike license, unless stated otherwise. Cite this article:
Corruption Facts for Kids. Kiddle Encyclopedia.