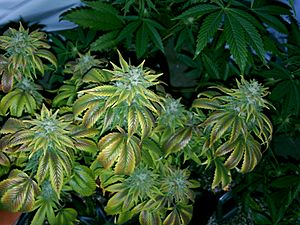 In some cases, the goods or services are cheaper than on the normal market, because taxes or production costs do not need to be paid - very often the goods traded were stolen. In other cases, the price on the black market is higher, because the goods are difficult to get, and producing or handling them may be dangerous. Prices in the illegal drug trade are often much higher than for similar but legitimate goods, for these reasons.

As with legitimate trade, the economic principles are still that of a market: supply and demand influence the price.

All content from Kiddle encyclopedia articles (including the article images and facts) can be freely used under Attribution-ShareAlike license, unless stated otherwise. Cite this article:
Black market Facts for Kids. Kiddle Encyclopedia.