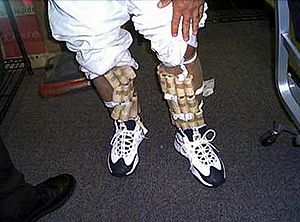 A smuggler of rare birds arrested by the U.S. Customs and Border Protection at a U.S. border

Smuggling is moving goods or people illegally, often across a border. In past centuries high tariffs were a major reason for smuggling. Drug smuggling or arms trafficking are modern forms of it. Illegal immigration is also called "People smuggling".

All content from Kiddle encyclopedia articles (including the article images and facts) can be freely used under Attribution-ShareAlike license, unless stated otherwise. Cite this article:
Smuggling Facts for Kids. Kiddle Encyclopedia.