Nairobi is the capital and the largest city of Kenya. The name comes from the Maasai phrase Enkare Nairobi, which translates to "cool water", a reference to the Nairobi River which flows through the city. The city proper had a population of 3,138,369 in the 2009 census, while the metropolitan area has a population of 6,547,547. The city is popularly referred to as the Green City in the Sun.

Nairobi was founded in 1899 by the colonial authorities in British East Africa, as a rail depot on the Uganda Railway. The town quickly grew to replace Machakos as the capital of Kenya in 1907. After independence in 1963, Nairobi became the capital of the Republic of Kenya. During Kenya's colonial period, the city became a centre for the colony's coffee, tea and sisal industry. The city lies on the River Athi in the southern part of the country, and has an elevation of 1,795 metres (5,889 ft) above sea level.

Home to thousands of Kenyan businesses and over 100 major international companies and organisations, including the United Nations Environment Programme (UN Environment) and the United Nations Office at Nairobi (UNON), Nairobi is an established hub for business and culture. The Nairobi Securities Exchange (NSE) is one of the largest in Africa and the second-oldest exchange on the continent. It is Africa's fourth-largest exchange in terms of trading volume, capable of making 10 million trades a day. 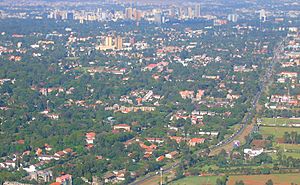 An aerial view of Nairobi, the central business district and Ngong Road 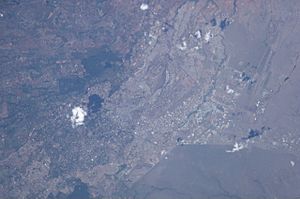 Nairobi is situated between the cities of Kampala and Mombasa. As Nairobi is adjacent to the eastern edge of the Rift Valley, minor earthquakes and tremors occasionally occur. The Ngong Hills, located to the west of the city, are the most prominent geographical feature of the Nairobi area. Mount Kenya is situated north of Nairobi, and Mount Kilimanjaro is towards the south-east. 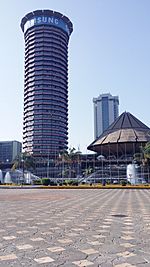 Kenyatta International Convention Centre with Times Tower in the background

The Nairobi River and its tributaries traverse through the Nairobi County. Nobel Peace Prize laureate Wangari Maathai fought fiercely to save the indigenous Karura Forest in northern Nairobi which was under threat of being replaced by housing and other infrastructure.

Nairobi's western suburbs stretch all the way from the Kenyatta National Hospital in the south to the UN headquarters at Gigiri suburb in the north, a distance of about 20 kilometres (12 mi). The city is centred on the City Square, which is located in the Central Business District. The Kenyan Parliament buildings, the Holy Family Cathedral, Nairobi City Hall, Nairobi Law Courts, and the Kenyatta Conference Centre all surround the square.

Under the Köppen climate classification, Nairobi has a subtropical highland climate (Cfb/Cwb). At 1,795 metres (5,889 ft) above sea level, evenings may be cool, especially in the June/July season, when the temperature can drop to 9 °C (48 °F). The sunniest and warmest part of the year is from December to March, when temperatures average in the mid-twenties during the day. The mean maximum temperature for this period is 24 °C (75 °F).

There are two rainy seasons, but rainfall can be moderate. The cloudiest part of the year is just after the first rainy season, when, until September, conditions are usually overcast with drizzle. As Nairobi is situated close to the equator, the differences between the seasons are minimal. The seasons are referred to as the wet season and dry season. The timing of sunrise and sunset varies little throughout the year for the same reason. 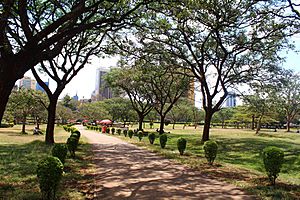 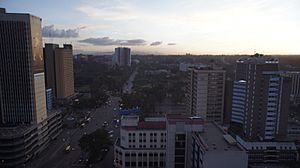 Nairobi has many parks and open spaces throughout the city. Much of the city has dense tree-cover and plenty of green spaces. The most famous park in Nairobi is Uhuru Park. The park borders the central business district and the neighbourhood Upper Hill. Uhuru (Freedom in Swahili) Park is a centre for outdoor speeches, services, and rallies. The park was to be built over by former President Daniel arap Moi, who wanted the 62-storey headquarters of his party, the Kenya African National Union, situated in the park. However, the park was saved following a campaign by Nobel Peace Prize winner Wangari Maathai.

Central Park is adjacent to Uhuru Park, and includes a memorial for Jomo Kenyatta, the first president of Kenya, and the Moi Monument, built in 1988 to commemorate the second president's first decade in power. Other notable open spaces include Jeevanjee Gardens, City Park, 7 August Memorial Park, and Nairobi Arboretum. 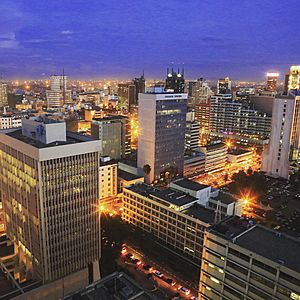 Nairobi is a major financial capital of Africa. It is also one of the most modern cities in Africa.

Nairobi is home to the Nairobi Securities Exchange (NSE), one of Africa's largest. 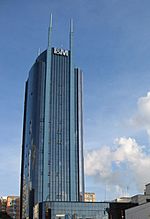 Nairobi has produced a few Tech Firms like Craft Silicon, Kangai Technologies, Jambo Pay etc who have been in the forefront of Technology, Innovation and Cloud based computing services. Their products are widely used and have considerable market share presence within Kenya and outside its borders.

Goods manufactured in Nairobi include clothing, textiles, building materials, processed foods, beverages, and cigarettes. Several foreign companies have factories based in and around the city. These include Goodyear, General Motors, Toyota Motors, and Coca-Cola.

Nairobi has a large tourist industry, being both a tourist destination and a transport hub. 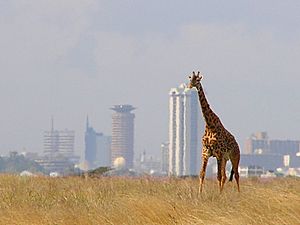 A giraffe at Nairobi National Park, with Nairobi's skyline in background

Nairobi is one of the few cities in the world with a national park within its boundaries, making it a prime tourist destination as well, with several other tourist attractions.

Nairobi is home to several museums, sites, and monuments.

Nairobi is nicknamed the Safari Capital of the World or the Green City in the Sun, and has many hotels to cater for safari-bound tourists.

Nairobi's night life is popular with tourists, young and old. From a collection of gourmet restaurants offering local and international cuisine, Nairobi has something to offer to every age and pocket. Most common known food establishments include The Carnivore and The Tamarind Restaurants which have outlets in Langata, City Centre, and the Village Market. For those more discerning travellers, one can choose from a wide array of local cuisine, Mediterranean, fast food, Ethiopian, and Arabian.

Other sites include Jomo Kenyatta's Mausoleum, Kenya National Theatre, and the Kenya National Archives. Art galleries in Nairobi include the Rahimtulla Museum of Modern Art (Ramoma), the Mizizi Arts Centre, and the Nairobi National Museum. 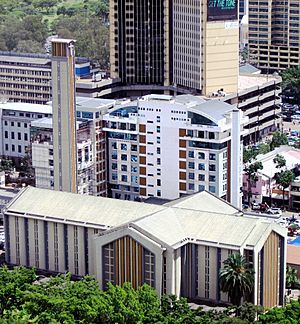 Basilica of the Holy Family in Nairobi

Nairobi is a cosmopolitan and multicultural city. The names of some of its suburbs, including Hurlingham and Parklands reflect Nairobi's early history of colonial occupation.

By the mid twentieth century, many foreigners settled in Nairobi from other parts of the British Empire, primarily India and parts of (present-day) Pakistan. These immigrants were workers who arrived to construct the Kampala – Mombasa railway, settling in Nairobi after its completion, and also merchants from Gujarat. Nairobi also has established communities from Somalia and Sudan.

There are a number of churches, mosques, temples, and gurdwaras within the city. Prominent places of worship in Nairobi include the Cathedral Basilica of the Holy Family, All Saints Cathedral, Ismaili Jamat Khana, and Jamia Mosque.

Nairobi has two informal nicknames. The first is "The Green City in the Sun", which is derived from the city's foliage and warm climate. The second is the "Safari Capital of the World", which is used due to Nairobi's prominence as a hub for safari tourism.

There are a number of shopping malls in the Nairobi Area. These include: Garden city mall, Thika road mall (TRM), the West Gate mall, Prestige Plaza, the Village Market, the Sarit Centre, the Junction, Rosslyn Riviera mall, Two Rivers mall. A variety of amenities are provided at these malls and include: cinemas, fashion and apparel retailers, bookshops, electronics and grocery stores, coffeehouses and restaurants.

All content from Kiddle encyclopedia articles (including the article images and facts) can be freely used under Attribution-ShareAlike license, unless stated otherwise. Cite this article:
Nairobi Facts for Kids. Kiddle Encyclopedia.