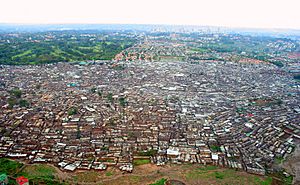 A view of Kibera 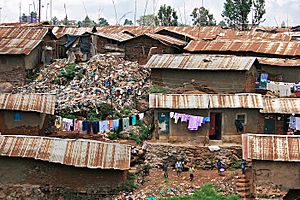 Kibera (Nubian: Forest or Jungle) is a division of Nairobi Area, Kenya, and neighbourhood of the city of Nairobi, 6.6 kilometres (4.1 mi) from the city centre. Kibera is the largest slum in Nairobi, and the largest urban slum in Africa.

The 2009 Kenya Population and Housing Census reports Kibera's population as 170,070. Other sources suggest the total Kibera population may be 500,000 to well over 1,000,000 depending on which slums are included in defining Kibera.

Most of Kibera slum residents live in extreme poverty, earning less than $1.00 per day. Unemployment rates are high. Persons living with HIV in the slum are many, as are AIDS cases. Cases of assault are common. There are few schools, and most people cannot afford education for their children.

Clean water is scarce. Diseases caused by poor hygiene are prevalent. A great majority living in the slum lack access to basic services, including electricity, running water, and medical care.

The Government initiated a clearance programme to replace the slum with a residential district of high rise apartments, and relocating the residents to these new buildings upon completion.

The neighbourhood is divided into a number of villages, including Kianda, Soweto East, Gatwekera, Kisumu Ndogo, Lindi, Laini Saba, Siranga, Makina and Mashimoni.

All content from Kiddle encyclopedia articles (including the article images and facts) can be freely used under Attribution-ShareAlike license, unless stated otherwise. Cite this article:
Kibera Facts for Kids. Kiddle Encyclopedia.