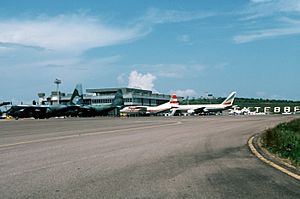 Operation Entebbe, also known as Operation Jonathan, was a hostage rescue mission. It took place in July 1976 in Entebbe, Uganda. An Air France airplane was hijacked on 27 June 1976. The terrorists wanted the release of prisoners held in Israel and four other countries. Many of the hostages were later released but about 100 Israelis and Jews were still held in. Israeli forces planned and held a rescue of the remaining 106 passengers on 4 July 1976. 102 of the passengers were rescued. Lt Col Yonatan Netanyahu, who led the mission, was the only rescuer to be killed.

All content from Kiddle encyclopedia articles (including the article images and facts) can be freely used under Attribution-ShareAlike license, unless stated otherwise. Cite this article:
Operation Entebbe Facts for Kids. Kiddle Encyclopedia.