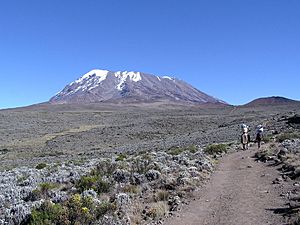 Kilimanjaro (or Kilima Njaro, which means "shining mountain" in Swahili), formerly Kaiser-Wilhelm-Spitze, is a mountain in northeastern Tanzania. Kilimanjaro is the tallest free-standing mountain rise in the world, rising 4600 meters (15,000 ft) from the base, and includes the highest peak in Africa at 5,895 meters (19,340 ft). It gives a dramatic view from the surrounding plains. Almost 85 % of the ice cover on Kilimanjaro disappeared from October 1912 to June 2011.

Kilimanjaro is also a strato-like volcano. It has explosive eruptions. The last major eruption was about 100,000 years ago.

Kilimanjaro is a large stratovolcano and is composed of three distinct volcanic cones: Kibo, the highest; Mawenzi at 5,149 metres (16,893 ft); and Shira, the shortest at 4,005 metres (13,140 ft). Mawenzi and Shira are extinct, while Kibo is dormant and could erupt again.

Eruptive activity at the Shira centre commenced about 2.5 million years ago, with the last important phase occurring about 1.9 million years ago, just before the northern part of the edifice collapsed. Shira is topped by a broad plateau at 3,800 metres (12,500 ft), which may be a filled caldera. The remnant caldera rim has been degraded deeply by erosion. Before the caldera formed and erosion began, Shira might have been between 4,900 m (16,000 ft) and 5,200 m (17,000 ft) high. It is mostly composed of basic lavas with some pyroclastics. The formation of the caldera was accompanied by lava emanating from ring fractures, but there was no large scale explosive activity. Two cones formed subsequently, the phonolitic one at the northwest end of the ridge and the doleritic "Platzkegel" in the caldera centre.

Both Mawenzi and Kibo began erupting about 1 million years ago. They are separated by the "Saddle Plateau" at 4,400 metres (14,400 ft) elevation. 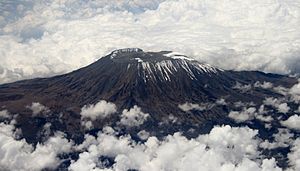 Aerial view of Kilimanjaro in December 2009

The youngest dated rocks at Mawenzi are about 448,000 years old. Mawenzi forms a horseshoe shaped ridge with pinnacles and ridges opening to the northeast that has a tower-like shape resulting from deep erosion and a mafic dyke swarm. Several large cirques cut into the ring, the largest of these sits on top of the Great Barranco gorge. Also notable are the Ost and West Barrancos on the northeastern side of the mountain. Most of the eastern side of the mountain has been removed by erosion. Mawenzi has a subsidiary peak named Neumann Tower (4,425 metres (14,518 ft)).

Kibo is the largest cone and is more than 15 miles (24 km) wide at the "Saddle Plateau" altitude. The last activity here has been dated to between 150,000 and 200,000 years ago and created the current Kibo summit crater. Kibo still has gas-emitting fumaroles in the crater. Kibo is capped by an almost symmetrical cone with escarpments rising 180 metres (590 ft) to 200 metres (660 ft) on the south side. These escarpments define a 2.5-kilometre-wide (1.6 mi) caldera caused by the collapse of the summit. Within this caldera is the Inner Cone and within the crater of the Inner Cone is the Reusch Crater, which the Tanganyika government in 1954 named after Gustav Otto Richard Reusch upon his climbing the mountain for the 25th time (out of 65 attempts during his lifetime). The Ash Pit, 350 metres (1,150 ft) deep, lies within the Reusch Crater. About 100,000 years ago, part of Kibo's crater rim collapsed, creating the area known as the Western Breach and the Great Barranco. 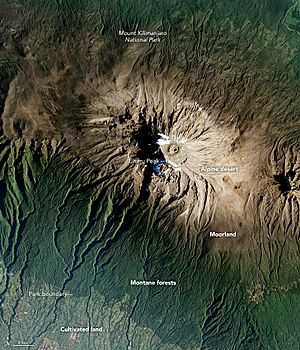 An almost continuous layer of lavas buries most older geological features, with the exception of exposed strata within the Great West Notch and the Kibo Barranco. The former exposes intrusions of syenite. Kibo has five main lava formations:

Kibo has more than 250 parasitic cones on its northwest and southeast flanks that were formed between 150,000 and 200,000 years ago and erupted picrobasalts, trachybasalts, ankaramites, and basanites. They reach as far as Lake Chala and Taveta in the southeast and the Lengurumani Plain in the northwest. Most of these cones are well preserved, with the exception of the Saddle Plateau cones that were heavily affected by glacial action. Despite their mostly small size, lava from the cones has obscured large portions of the mountain. The Saddle Plateau cones are mostly cinder cones with terminal effusion of lava, while the Upper Rombo Zone cones mostly generated lava flows. All Saddle Plateau cones predate the last glaciation.

According to reports gathered in the 19th century from the Maasai, Lake Chala on Kibo's eastern flank was the site of a village that was destroyed by an eruption.

The mountain is drained by a network of rivers and streams, especially on the wetter and more heavily eroded southern side and especially above 1,200 metres (3,900 ft). Below that altitude, increased evaporation and human water usage reduces the waterflows. The Lumi and Pangani rivers drain Kilimanjaro on the eastern and southern sides, respectively.

There are 6 routes up Kilimanjaro: Lemosho, Machame, Marangu, Umbwe, Rongai and Northern Circuit.

Since there are big differences in height, climbers can feel highland sickness. 7-, 8- and 9-day routes are recommended (especially for beginners), as on them it will be easier to adapt to less oxygen in the air. The more time is spent being on the slope, the easier it is to acclimatize.

All content from Kiddle encyclopedia articles (including the article images and facts) can be freely used under Attribution-ShareAlike license, unless stated otherwise. Cite this article:
Mount Kilimanjaro Facts for Kids. Kiddle Encyclopedia.