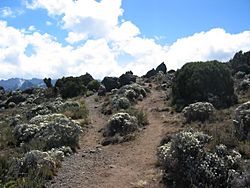 Moorland or moor is a type of habitat that one can find in upland areas, that are characterised by acidic soils.

Moorland habitats are rather common in the neotropics and tropical Africa but one can find them also in small scattered places in northern and western Europe, northern Australia, North America, Central Asia and the Indian subcontinent. In the tiny areas of European moorlands tend to be environments with only very few species. They are often dominated by heather. In the far more extensive moorlands of the tropics species diversity can be extremely high.

Moorlands differ from typical heathland in being colder and much wetter, often with extensive bogs.

Famous moorlands in the UK

Notable areas of upland moorland in Britain include the Dark Peak, the Forest of Bowland, the Lake District, the Pennines, Mid Wales, the Southern Uplands of Scotland, the Scottish Highlands and a few very small pockets in western Herefordshire. 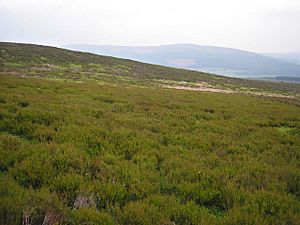 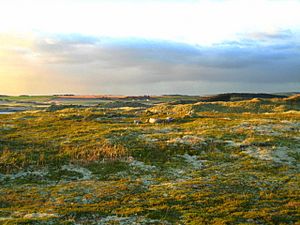 In Europe if the heather and other vegetation is left for too long, a large volume of dry and combustible material builds up. This is may cause a fire which may burn out a large area. But generally moorland wildlife copes with even major fires and are easily able to recover if such intense burnings are not too frequent.

All content from Kiddle encyclopedia articles (including the article images and facts) can be freely used under Attribution-ShareAlike license, unless stated otherwise. Cite this article:
Moorland Facts for Kids. Kiddle Encyclopedia.