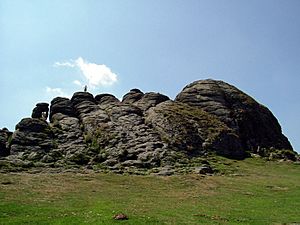 Hay Tor is one of Dartmoor's best-known sites. Granite from here was used to build Nelson's Column and Tower Bridge in London

Dartmoor is a national park in Devon, a county in England. Its highest point is High Willhays, 621 metres high. This is the highest point in the south of England. It has a large area of moorland, and is very hilly. There is much woodland on its lower slopes.

Dartmoor is famous for its tors—outcrops of rock on top of many of its hills. These are the remains of volcanic activity in the Carboniferous period.

Animal life on Dartmoor includes birds such as the ring ouzel and dunlin, and the endangered marsh fritillary butterfly. Its bogs are home to many unusual plants such as the sundew. 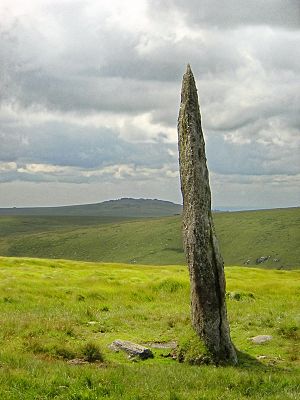 Beardown Man, Dartmoor - one of many standing stones

All content from Kiddle encyclopedia articles (including the article images and facts) can be freely used under Attribution-ShareAlike license, unless stated otherwise. Cite this article:
Dartmoor Facts for Kids. Kiddle Encyclopedia.