Ivybridge is a small town and civil parish in the South Hams, in Devon, England. It lies about 9 miles (14.5 km) east of Plymouth. It is at the southern extremity of Dartmoor, a National Park of England and Wales and lies along the A38 "Devon Expressway" road. There are three electoral wards in Ivybridge (Central, Filham & Woodlands) with a total population of 11,851.

Mentioned in documents as early as the 13th century, Ivybridge's early history is marked by its status as an important crossing-point over the River Erme on the Exeter-to-Plymouth route. In the 16th century mills were built using the River Erme's power. The parish of Saint John was formed in 1836. Ivybridge became a civil parish in 1894 and a town in 1977.

The early urbanisation and development of Ivybridge largely coincided with the Industrial Revolution. When the South Devon Railway Company built its train route through Ivybridge in the 19th century a paper mill was constructed alongside it and this led to an increase in housing nearby. The paper mill recently closed, after over 150 years in the town, and the buildings are being converted to homes and shops. Although occasionally referred to as a dormitory town, many people work in the town itself, and agriculture continues to play an economic role for Ivybridge's hinterland. The area surrounding Ivybridge is almost completely farmland. 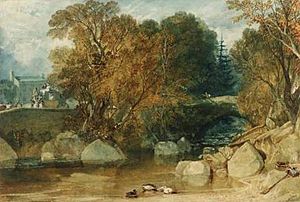 The name Ivybridge is derived from a small 13th century hump-backed bridge of the same name. Apart from swimming, it was the only means of crossing the river until 1819. "Ivy" was used to describe the bridge, because there was ivy growing on the bridge. As the bridge was the centre of the village and important to its very existence, it was named the "parish of Ivybridge" in 1894.

The first mention of settlement in Ivybridge was the manor of Stowford in the Domesday Book of 1086. Although the first mention of Ivybridge came in 1280 when it was described as "dowry of land on the west side of the River Erme, by the Ivy Bridge." There was a chapel, that was on the site of Saint John's Church, since 1402. From the 16th century onwards mills were built in the town, harnessing the power of the river. Records show that in the 16th century there was a corn mill, a tin mill and an edge mill. One of the mills, 'Glanville's Mill' (a corn mill), was situated where many of the town's shops are today and gives its name to the shopping centre. The first church (Saint John's) was built in 1790 as a chapel of ease, but 45 years later in 1835 it was consecrated as a district church. In 1819 the Ivy Bridge lost its position as the only means of crossing the river when the 'New Bridge' was built joining Fore Street and Exeter Road.

The geology of Ivybridge is varied. Throughout most of the town the rock is Old Red Sandstone (sedimentary) from the Devonian period. To the north of the town Granite can be found as it is situated on the slopes of Dartmoor – a large pre-volcanic area of Granite. Along the River Erme large boulders and rocks can be found deposited on its meandering path brought all the way from Dartmoor; the Ivy Bridge itself is made out of Granite. 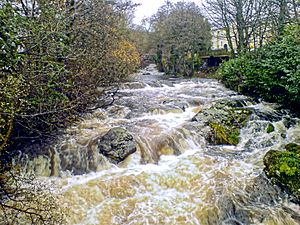 The built environment in and around Ivybridge is mainly characterised by its suburban streets plans and houses, although in the centre of Ivybridge it's mainly characterised by Victorian buildings. From the centre of the town most buildings are terraced and now many of these buildings have been converted into retail outlets along Fore Street – the town's central business district. In the middle layer of the town most buildings are semi-detached and built on quite steep roads. More detached houses are found on the outer layers of the city on the east and on the west of the town. Over the past decades the town has been shaped by its two most essential pieces of infrastructure: the railway line to the north and the A38 dual carriageway to the south. No large scaling housing has been built on either side of these boundaries. Due to this Ivybridge has been forced to grow east and west rather than north and south; it stretches approximately 1.76 miles (2.83 km) from east to west and 1 mile (1.6 km) from north to south.

Along with the rest of South West England, Ivybridge has a temperate climate which is generally wetter and milder than the rest of the British Isles. The annual mean temperature is approximately 11 °C (52 °F) and shows a seasonal and a diurnal variation, but due to the modifying effect of the sea the range is less than in most other parts of the British Isles. February is the coldest month with mean minimum temperatures between 3 °C (37 °F) and 4 °C (39 °F). July and August are the warmest months with mean daily maxima over 19 °C (66 °F).

The climate of South West England has a favoured location with respect to the Azores high pressure when it extends its influence north-eastwards towards the British Isles, particularly in summer. Coastal areas have average annual sunshine totals over 1,600 hours.

Rainfall tends to be associated with Atlantic depressions or with convection. The Atlantic depressions are more vigorous in autumn and winter and most of the rain which falls in those seasons in the south-west is from this source. Average annual rainfall is around 980 millimetres (39 in). The number of days with snow falling is typically less than ten per winter. November to March have the highest mean wind speeds, with June to August having the lightest winds. The predominant wind direction is from the south-west and, as a result, the air quality in Ivybridge may be reduced by the (proposed) construction of an incinerator southwest of the town (at the New England Quarry) with possible implications for health.

Ivybridge's most recent census indicates that Ivybridge had a population of 11,851. The United Kingdom Census 2011 was carried out by the Office for National Statistics in England and Wales, on Sunday, 27 March 2011. To put that figure into comparison with the area surrounding Ivybridge: it accounts for about 14% of the South Hams' total population (83,140) and it accounts for about 1% of Devon's total population (1,133,800). The town has a median age of 42 (up from 36 since 2001), which is above the national average of 39.

The ethnicity of Ivybridge is predominately white with 98.7% of the population identifying themselves as such. This is slightly higher than the local average of the South Hams (98.3%), although much lower than the national average for England (85.5%). Of the remaining ethnic groups, 0.7% are mixed, 0.5% are Asian, 0.1% are Black and 0.1% are classed as other. 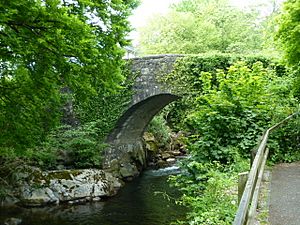 The town's natural landmark is Western Beacon; a hill that overlooks the town. People walk up there for the views of Ivybridge and the South Hams. The town's first manmade landmark is the Ivy Bridge; a 13th century hump-backed bridge covered in Ivy. It is still in use today and gives the name of the town – Ivybridge. The two remaining industrial landmarks of the town are the viaduct over the River Erme and the paper mill. The original viaduct was built by Isambard Kingdom Brunel in 1848, only the granite piers remain. The operational line alongside was built by Sir James Charles Inglis in 1893 for the Great Western Railway. It still carries the mainline trains. They were key to the town's initial growth in the Industrial Revolution and are still importance to the town today. In the centre of the town a war memorial was constructed and each year on Remembrance Day the town holds a ceremony to those who lost their lives, in recent years another memorial has also been built nearby commemorating the lives of American servicemen stationed in and near the town in 1944. The Watermark is one of the town's modern landmarks, which began construction in 2007 and was completed in March 2008 at a cost of £1.4 million. It functions as a library, entertainment venue, cinema and offers office space. 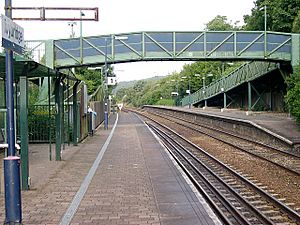 Ivybridge has long been a staging post on the Exeter to Plymouth road dating back to the 13th century and the "Ivy Bridge" was the only way over the River Erme at the time. The bridge itself is still in use to this day taking cars (one-way) and pedestrians across the river. In 1819 a new bridge was built at the top of Fore Street (approximately 130 yards down the river). It is now used as a 1-way road across the river for vehicles and a separate pedestrian bridge lies alongside it. Another bridge (Marjorie Kelly Way/B3213, built in the 1990s) is situated at the bottom of Fore Street. In 1974 the A38 road was opened linking Ivybridge to Plymouth and Exeter. It was the first major trunk road for Ivybridge and was bypassed at the B3213, which runs through the centre of Ivybridge and connects it to the nearby villages of Bittaford and Wrangaton.

The first railway station at Ivybridge was not complete when the South Devon Railway was opened, but was brought into use six weeks later on 15 June 1848. The building was situated on the north side of the track, immediately to the west of Ivybridge Viaduct. Passenger trains were withdrawn on 2 March 1965. On 15 July 1994 a new station was opened on a new site costing £380,000, outside the town, to the east. It is operated by Great Western Railway who run links to London Paddington, and from Exeter to Cornwall. The station is advertised as a Park and Ride for the nearby city of Plymouth, although the level of service is infrequent and sporadic.

The town has a bus service (X80) to Plymouth, Totnes and Torquay run by first First South West. Stagecoach South West operates an hourly route between Plymouth and Paignton, which includes Ivybridge as a primary stop. 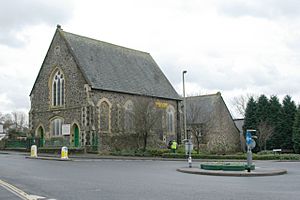 Ivybridge has six churches. St John's Church (Anglican) is the parish church situated near the Ivy Bridge. There is also a Baptist church, a Methodist church, and Ivybridge Congregational Church. On the western outskirts of the town is a Roman Catholic church – St Austin's Priory. The Salvation Army Church is currently held at the former Ivybridge Youth Centre.

All content from Kiddle encyclopedia articles (including the article images and facts) can be freely used under Attribution-ShareAlike license, unless stated otherwise. Cite this article:
Ivybridge Facts for Kids. Kiddle Encyclopedia.