Bedford is an incorporated town and former independent city located within Bedford County in the U.S. state of Virginia. It serves as the county seat of Bedford County. As of the 2010 census, the population was 6,222. It is part of the Lynchburg Metropolitan Statistical Area.

Known as the "place that sells itself," Bedford boasts the Blue Ridge Mountains to the North, Smith Mountain Lake to the South, Lynchburg to the East, and I-81/Roanoke to the West.

Bedford sits at the feet of the Peaks of Otter. 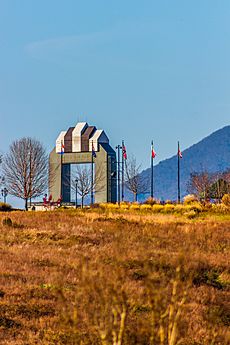 The D-Day National Memorial, as viewed from the nearby visitor center

The climate in this area is characterized by mild, humid summers and generally mild to cool winters. According to the Köppen Climate Classification system, Bedford has a humid subtropical climate, abbreviated "Cfa" on climate maps.

Bedford has a Friendship Treaty with: 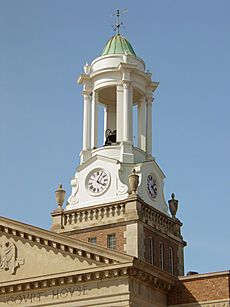 The cupola atop the Bedford County Court House was built in 1866.

According to the town's 2019 Comprehensive Annual Financial Report, the top employers in the city are:

Bedford is served by Bedford County Public Schools, which operates Liberty High School and Liberty Middle School in the community. Fifteen elementary schools feed students into these and two other pairs of middle and high schools elsewhere in the county.

However, the newly restored Amtrak service to Roanoke does not make stops at Bedford.

All content from Kiddle encyclopedia articles (including the article images and facts) can be freely used under Attribution-ShareAlike license, unless stated otherwise. Cite this article:
Bedford, Virginia Facts for Kids. Kiddle Encyclopedia.