Bedford County is a United States county located in the Piedmont region of the Commonwealth of Virginia. Its county seat is the town of Bedford, which was an independent city from 1968 until rejoining the county in 2013.

Bedford County was created in 1753 from parts of Lunenburg County, and several changes in alignment were made until the present borders were established in 1786. The county was named in honor of John Russell, an English statesman and fourth Duke of Bedford.

Bedford County is part of the Lynchburg, Virginia Metropolitan Statistical Area. As of the 2020 census, Bedford's population was 79,462. The county population has more than doubled since 1980. 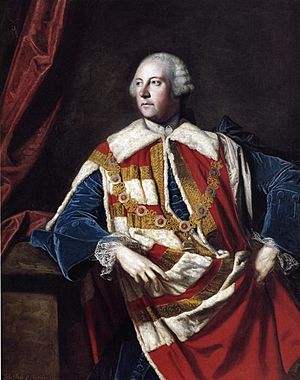 John Russell, 4th Duke of Bedford, for whom the county was named

The Piedmont area had long been inhabited by indigenous peoples. At the time of European encounter, mostly Siouan-speaking tribes lived in this area.

Bedford County was established by European Americans on December 13, 1753 from parts of Lunenburg County. Later in 1756, a portion of Albemarle County lying south of the James River was added. The county is named for John Russell, the fourth Duke of Bedford, who was a Secretary of State of Great Britain. In 1782, Campbell County was formed from eastern Bedford County and the county seat was moved from New London to Liberty (now Bedford). Also in 1786, the portion of Bedford County south of the Staunton (Roanoke) River was taken with part of Henry County to form Franklin County.

As of 2017, the largest self-reported ancestry groups were:

Historically, Bedford County was an agricultural economy. While agriculture is still an important factor in the county's economy, Bedford County has significant residential development to serve Lynchburg, Roanoke, and Smith Mountain Lake. Tourism and retail are also becoming more significant with some new industry near Forest and New London.

All content from Kiddle encyclopedia articles (including the article images and facts) can be freely used under Attribution-ShareAlike license, unless stated otherwise. Cite this article:
Bedford County, Virginia Facts for Kids. Kiddle Encyclopedia.