Campbell County is a United States county situated in the south central part of the Commonwealth of Virginia. Located in the Piedmont region of Virginia, Campbell borders the Blue Ridge Mountains. The county seat is Rustburg.

Grounded on a tobacco cash crop economy, Campbell County was created in 1782 from part of Bedford County. The county was named in honor of General William Campbell, hero of the American Revolutionary War.

Campbell County is part of the Lynchburg, VA Metropolitan Statistical Area. As of the 2010 census, the county population is 54,842. The number of residents has grown steadily in every census after 1930, and the total population has more than doubled since that time. 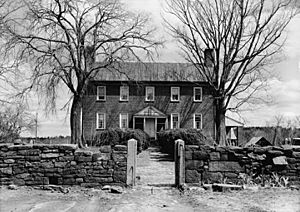 The area that would become Campbell County was first settled by Europeans, initially Scotch-Irish Presbyterians, in the late 1730s. After nearly fifty years of immigration and development, the newly formed county was established in 1782 from part of Bedford County. Campbell County was named for Revolutionary War hero, General William Campbell, who is known for the 1780 Battle of Kings Mountain. The independent city of Lynchburg, Virginia was subsequently formed from the county in 1786.

From its earliest days, the county relied on tobacco as the primary cash crop and basis for the economy, though it also developed early manufacturing operations. Brookneal, with its strategic location on the Staunton River, was long an important tobacco and textile hub. However, the departure of manufacturing and the changing tobacco market has forced Campbell to transform from a mainly agricultural area into a mixture of suburban and rural communities.

Campbell County is home to sporting events and organizations including:

All content from Kiddle encyclopedia articles (including the article images and facts) can be freely used under Attribution-ShareAlike license, unless stated otherwise. Cite this article:
Campbell County, Virginia Facts for Kids. Kiddle Encyclopedia.