The Roanoke River is a river in southern Virginia and northeastern North Carolina in the United States, 410 miles (660 km) long. A major river of the southeastern United States, it drains a largely rural area of the coastal plain from the eastern edge of the Appalachian Mountains southeast across the Piedmont to Albemarle Sound. An important river throughout the history of the United States, it was the site of early settlement in the Virginia Colony and the Carolina Colony. An 81-mile (130 km) section of its lower course in Virginia between the Leesville Lake and Kerr Lake is known as the Staunton River, pronounced as is the Shenandoah Valley city of that name. It is impounded along much of its middle course to form a chain of reservoirs.

The river has its headwaters in the Blue Ridge Mountains in southwestern Virginia at Lafayette in Montgomery County where the North Fork and South Fork of the river merge. The North Fork, approximately 30 miles (48 km) long, rises between two mountain ridges and flows initially southwest, then loops back to the northeast. The South Fork, approximately 20 miles (32 km) long, rises in several streams in the mountains on the border of Floyd, Roanoke, and Montgomery counties and flows generally north, joining the North Fork from the south.

The combined stream flows northeast between mountain ridges through the Roanoke Valley, approximately 10 miles (16 km) to Salem, then east through the city of Roanoke, emerging from a gorge in the Blue Ridge Mountains southeast of Roanoke and forming the boundary between Franklin and Bedford counties. The river flows generally east-southeast across the Piedmont of southern Virginia and enters northeastern North Carolina, passing north of Roanoke Rapids at the fall line. The river flows southeast in a zigzag course across the coastal plain through the Roanoke River National Wildlife Refuge and then briefly turns north as it enters Batchelor Bay on the western end Albemarle Sound. The Roanoke River is also known as the Staunton River for 80 miles between Smith Mountain Lake and convergence with the Dan River at Kerr Lake.

The river is impounded in six locations. The first is the Niagara Dam just south of the City of Roanoke in Roanoke County adjacent to the town of Vinton. It was constructed in 1906 to supply power for the Roanoke Electric Car streetcar system, and is currently owned and operated by Appalachian Power. It is then impounded twice in succession in the Piedmont of southwestern Virginia downstream from Roanoke to form the Smith Mountain Lake and Leesville Lake reservoirs. Farther downstream in southern along the North Carolina border, the river is impounded by the John H. Kerr Dam to form the expansive Kerr Lake. In northeastern North Carolina, three miles (4.8 km) west of Roanoke Rapids, the river is impounded to form the Lake Gaston reservoir, and is impounded a final time to form Roanoke Rapids Lake. 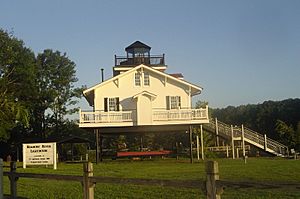 The Roanoke River valley was the homeland of various Native Americans, mostly Virginia Siouan, such as the Occaneechi (today part of the Haliwa-Saponi) and the Tutelo. The name Roanoke is derived from rawrenok, an Algonquian word for wampum. The deadly spring floods earned it the name "River of Death". The river's lower course began to be settled by Virginians about the middle of the 17th century, in what was known as the Albemarle Settlements. The upper reaches of the Roanoke River were explored by fur trading parties sent by Abraham Wood in the late 17th century, but these were not settled by English until the early 18th century.

In 1883, the small town of Big Lick on the river was selected as a major shops and terminal point for the new Norfolk and Western Railway to meet the Shenandoah Valley Railroad. Big Lick was renamed Roanoke for the river that bisected it, as the surrounding Roanoke County had been in 1838.

The Roanoke River was prone to serious flooding prior to the completion of the John H. Kerr Dam in 1953. Construction of the dam was precipitated by the 1940 South Carolina hurricane, which caused record flooding in the Roanoke River basin and led to calls for better flood control mechanisms.

All content from Kiddle encyclopedia articles (including the article images and facts) can be freely used under Attribution-ShareAlike license, unless stated otherwise. Cite this article:
Roanoke River Facts for Kids. Kiddle Encyclopedia.