John H. Kerr Dam is concrete gravity-dam located on the Roanoke River in Virginia, creating Kerr Lake. The dam was built by the U.S. Army Corps of Engineers between 1947 and 1953 for the purposes of flood control, and hydropower. The dam also serves wildlife resources, forest conservation, and public recreational uses. The John H. Kerr Dam currently produces over 426 GWh of electricity annually and has prevented over $385 million in flood damage since completion. The dam is named after John H. Kerr, a Congressman from North Carolina who was instrumental in authorizing the construction. 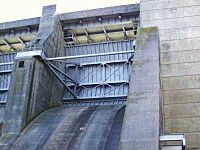 Tainter gate from the back, or spillway, on the John H. Kerr Dam, Boydton, Virginia (USACE)

Construction of the John H. Kerr dam was authorized by the 78th United States Congress in 1944 with the Flood Control Act of 1944 but did not commence until 1947. The site was selected because of the granite in the area that could support a large concrete dam. During early construction, the project was called Buggs Island Lake after a downstream island which was named after Samuel Bugg, an 18th-century early pioneer. The 82nd United States Congress renamed the project the John H. Kerr Dam later in 1951.

The John H. Kerr Dam Project consisted of a dam, powerhouse and switchyard. The dam was built in 53 sections called monoliths. A grouting tunnel or gallery was built in order to fill gaps between the dam and foundation with concrete. The spillway consists of 22-tainter gates for overflow and at the base of the dam, 6-sluice gates were installed to maintain downstream flows. Construction was completed and the dam was opened in 1953.

All content from Kiddle encyclopedia articles (including the article images and facts) can be freely used under Attribution-ShareAlike license, unless stated otherwise. Cite this article:
John H. Kerr Dam Facts for Kids. Kiddle Encyclopedia.