The company acquired Questar Corporation in the Western United States, including parts of Utah and Wyoming, in September 2016. In January 2019, Dominion Energy completed its acquisition of SCANA Corporation.

Dominion's corporate roots reach back to the Colonial era through predecessor companies that operated canal and river barging, street lighting, railways, and electric trolleys. In 1795, some dams were built along the Appomattox River for industrial use, beginning Dominion's history.

In 1909, Dominion began operating as an investor-owned electric utility under the name Virginia Railway & Power Company, founded by Frank Jay Gould, according to its website. In 1925, the name was changed to the Virginia Electric and Power Company (VEPCO), and Dominion was operated as a regulated monopoly. In 1940, Dominion doubled its service territory by merging with the Virginia Public Service Company. The transit operations were sold in 1944. In 1980, Dominion Resources, Inc., was incorporated as the holding company for VEPCO.

Throughout the 1980s and 1990s, Dominion initiated a series of expansions into regulated and non-regulated energy businesses, both domestically and internationally. During that era, the company also established itself as a world-class operator of nuclear power stations.

Dominion re-branded all of its operations in 2000 to Dominion from Virginia and North Carolina Power as well as Consolidated Gas in order to create a more unified energy company. In 2007, as part of another effort to refocus on core electric and gas operations, Dominion sold most of its Houston-based natural gas and oil exploration and production business for pre-tax proceeds of nearly $14 billion. Its onshore US oil and gas reserves were sold in separate deals to Loews Corporation and to XTO Energy, while its Gulf of Mexico reserves were sold to Eni, and its Canadian reserves were sold to two Canadian trusts. Dominion still retains some production areas in Appalachia, however.

In 2017, Dominion Resources rebranded itself to Dominion Energy, following with a new logo. 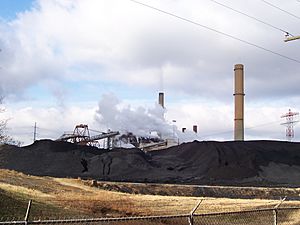 Dominion generates electricity for both regulated sale in its Virginia and North Carolina markets, and also for wholesale in other markets in the Northeast and Midwest United States. Electricity generation is the largest unit of Dominion.

Dominion is a regulated electric utility that transmits, and distributes electricity from its power plants in Virginia, North Carolina, Connecticut, and West Virginia to customers.

Dominion is a stakeholder in a joint venture planning to build the 600 miles (970 km) Atlantic Coast Pipeline, a natural gas pipeline that will run between West Virginia and North Carolina and is planned to be in service in late 2019.

Dominion's social investment program is carried out primarily through the Dominion Foundation, which gives about $20 million each year to charities in the states in which Dominion does business.

All content from Kiddle encyclopedia articles (including the article images and facts) can be freely used under Attribution-ShareAlike license, unless stated otherwise. Cite this article:
Dominion Energy Facts for Kids. Kiddle Encyclopedia.