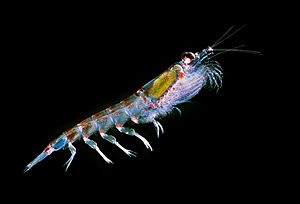 Antarctic krill, whose species comprises roughly 0.66% of the Earth's biomass, the highest of any single animal species. 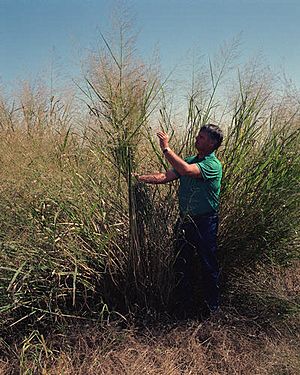 Switchgrass, a hardy plant used in the biofuel industry in the United States

Biomass is a basic term in ecology, and in the energy production industry. Organic waste such as dead plant and animal material, animal dung and kitchen waste can be converted into gaseous fuel called biogas. The organic waste is decomposed by bacteria in biogas digesters to emit biogas which is essentially a mixture of methane and carbon dioxide.

In ecology, biomass means the accumulation of living matter. It is the total living material in a given area or a biological community or group. Biomass is measured by weight, or by dry weight, per given area (per square metre or square kilometer). In the energy industry, it refers to biological material which can be used as fuel or for industrial production. Biomass includes plant matter grown for use as biofuel, and also includes plant or animal matter used for production of fibres, chemicals or heat. Biomass may also include biodegradable wastes which can be burnt as fuel. It excludes organic material which has been transformed by geological processes into substances such as coal or petroleum. It is usually measured by dry weight.

The term biomass is especially useful for plants, where some internal structures may not always be considered living tissue, such as the wood (secondary xylem) of a tree.

Biomass is grown from several plants, including switchgrass, hemp, corn, poplar, willow and sugarcane. The particular plant used is usually not very important to the end products, but it does affect the processing of the raw material. Though biomass is a renewable fuel, its use can still contribute to global warming. This happens when the natural carbon equilibrium is disturbed; for example by deforestation or urbanization of green sites.

Biomass is part of the carbon cycle. Photosynthesis converts carbon from the atmosphere into plant matter. When the plant rots or burns, the carbon goes back into the atmosphere. This happens somewhat quickly, and plant matter used as a fuel can be constantly replaced by planting for new growth. Therefore, it doesn't much change the amount of atmospheric carbon.

Although fossil fuels come from things that died long ago, they are not considered biomass by the generally accepted definition because they contain carbon that has been 'out' of the carbon cycle for a very long time. Burning them combustion therefore adds much carbon dioxide to the atmosphere.

Other uses of biomass, besides fuel:

Plastics from biomass, like some made to dissolve in seawater, are made the same way as petroleum-based plastics, are actually cheaper to manufacture and meet or exceed most performance standards. But they lack the water resistance of conventional plastics.

The most successful animal, in terms of biomass, is the Antarctic krill, Euphausia superba, with a biomass of probably over 500 million tons across the world, about twice the total biomass of humans. Biomass may also be a measure of the dried organic mass of an ecosystem.

This is a summary of biomass data.

All content from Kiddle encyclopedia articles (including the article images and facts) can be freely used under Attribution-ShareAlike license, unless stated otherwise. Cite this article:
Biomass Facts for Kids. Kiddle Encyclopedia.