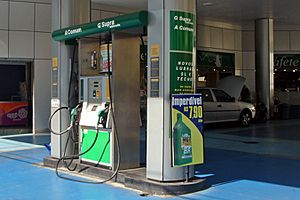 Neat ethanol on the left (A), gasoline on the right (G) at a filling station in Brazil

Biofuels are usually used to power cars, heat homes and for cooking. Biofuel companies are mainly from Europe, Asia and the Americas. Technologies developed at the Los Alamos National Lab even allows pollution to be converted into renewable biofuel. Agrofuels are biofuels that are produced from specific plants, rather than from waste processes such as landfill or recycled material.

There are two common ways to convert plants into gas and liquid fuels. One is to grow crops that are high in sugar (e.g. Sugar cane) or starch (e.g. corn), and then use yeast to produce ethyl alcohol (ethanol). The second is to grow plants that contain high amounts of vegetable oil, such as palm oil, soybean and algae. When these oils are heated, their viscosity is reduced, and they can be burned directly in a diesel engine, or they can be chemically processed to produce fuels such as biodiesel. Wood and its by-products can also be converted into biofuels such as charcoal, woodgas, methanol or ethanol fuel. It is also possible to make cellulosic ethanol from non-edible plant parts, but this can be expensive.

Solid biomass is also used. Firewood has been used for thousands of years. Many materials such as wood and grasses can be dried and pelletised and burnt, and this can be used to produce power.

All content from Kiddle encyclopedia articles (including the article images and facts) can be freely used under Attribution-ShareAlike license, unless stated otherwise. Cite this article:
Biofuel Facts for Kids. Kiddle Encyclopedia.