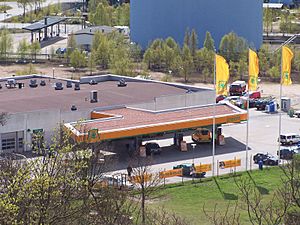 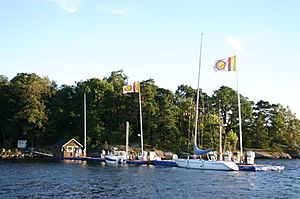 Not all gas stations are for cars only; this one in Stockholm, Sweden is for motor boats

A gas station, also known as a filling station, fueling station, service station or petrol station is a facility which sells fuel and lubricants for motor vehicles. The most common fuels sold are gasoline (petrol) or diesel fuel.

The fuel is dispensed by a gas pump. Some of the different kinds of fuel are:

Many gas stations have a convenience store close to the pumps, to make extra earnings. Some have tunnel car washs.

All content from Kiddle encyclopedia articles (including the article images and facts) can be freely used under Attribution-ShareAlike license, unless stated otherwise. Cite this article:
Gas station Facts for Kids. Kiddle Encyclopedia.