Sabah is a state of Malaysia located on the northern portion of Borneo. Sabah has land borders with the Malaysian state of Sarawak to the southwest and Indonesia's Kalimantan region to the south. The Federal Territory of Labuan is an island just off the Sabah coast. Sabah shares maritime borders with Vietnam to the west and the Philippines to the north and east. Kota Kinabalu is the state capital city, the economic centre of the state and the seat of the Sabah state government. Other major towns in Sabah include Sandakan and Tawau. As of the 2015 census in Malaysia, the state's population is 3,543,500. Sabah has an equatorial climate with tropical rainforests and abundant animal and plant species. The state has long mountain ranges on the west side which form part of the Crocker Range National Park. Kinabatangan River, second longest river in Malaysia runs through Sabah and Mount Kinabalu is the highest point of Sabah as well as of Malaysia.

The earliest human settlement in Sabah can be traced back to 20,000–30,000 years ago along the Darvel Bay area at the Madai-Baturong caves. The state had a trading relationship with China from the 14th century AD. Sabah came under the influence of the Bruneian Empire in the 14th and 15th centuries while the eastern part of the territory fell under the influence of the Sultanate of Sulu between the 17th and 18th centuries. The state was subsequently acquired by the British-based North Borneo Chartered Company in the 19th century. During World War II, Sabah was occupied by the Japanese for three years. It became a British Crown Colony in 1946. On 31 August 1963, Sabah was granted self-government by the British. Following this, Sabah became one of the founding members of the Federation of Malaysia (established on 16 September 1963) alongside Sarawak, Singapore (expelled in 1965), and the Federation of Malaya (Peninsular Malaysia or West Malaysia). The federation was opposed by neighbouring Indonesia, which led to the Indonesia–Malaysia confrontation over three years along with the threats of annexation by the Philippines, threats which continue to the present day.

Sabah exhibits notable diversity in ethnicity, culture and language. The head of state is the Governor, also known as the Yang di-Pertua Negeri, while the head of government is the Chief Minister. The government system is closely modelled on the Westminster parliamentary system and has one of the earliest state legislature systems in Malaysia. Sabah is divided into five administrative divisions and 27 districts. Malay is the official language of the state; and Islam is the state religion, but other religions may be practised in peace and harmony in any part of the state. Sabah is known for its traditional musical instrument, the sompoton.

Sabah has abundant natural resources, and its economy is strongly export oriented. Its primary exports include oil, gas, timber and palm oil. The other major industries are agriculture and ecotourism. 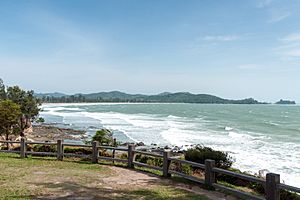 The northern tip of Borneo at Tanjung Simpang Mengayau facing both the South China Sea and Sulu Sea. 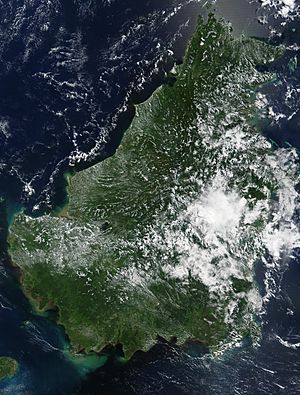 Sabah is located in northern Borneo as seen from NASA satellite image.

The total land area of Sabah is nearly 73,904 square kilometres (28,534 sq mi) surrounded by the South China Sea in the west, Sulu Sea in the northeast and Celebes Sea in the southeast. Sabah has a total of 1,743 kilometres (1,083 mi) coastline, of which 295.5 kilometres (183.6 mi) have been eroding. Because of Sabah coastline facing three seas, the state receive an extensive marine resources. Its exclusive economic zone (EEZ) is much larger towards the South China Sea and Celebes Sea than to the Sulu Sea. The state coastline is covered with mangrove and nipah forests. The mangroves cover about 331,325 hectares of the state land and constitute 57% of the total mangroves in the country. Both coastal areas in the west coast and east coast are entirely dominating by sand beaches, while in sheltered areas the sand was mixed with mud. The northern area of Tanjung Simpang Mengayau has a type of pocket beach. The areas in the west coast has a large freshwater wetlands, with the Klias Peninsula hosts a large area of tidal wetlands and a wetland centre known as the Kota Kinabalu Wetland Centre was designated as a Ramsar site in 2016. The western part of Sabah is generally mountainous, containing three highest peak. The main mountain ranges is the Crocker Range with several mountains varying height from about 1,000 metres to 4,000 metres. Adjacent to the Crocker Range is the Trus Madi Range with Mount Trus Madi, with a height of 2,642 metres. The highest peak is the Mount Kinabalu, with a height around 4,095 metres. It is one of the highest peak between the Himalayas and New Guinea. While located not far from Mount Kinabalu is Mount Tambuyukon, with a height of 2,579 metres. 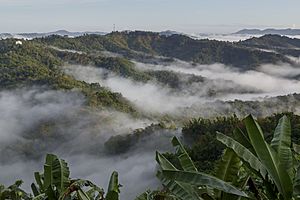 These mountains and hills are traversed by an extensive network of river valleys and are in most cases covered with dense rainforest. There are lower ranges of hills extending towards the western coasts, southern plains, and the interior or central part of Sabah. The central and eastern portion of Sabah are generally lower mountain ranges and plains with occasional hills. In the east coast located the Kinabatangan River, which is the second longest river in Malaysia after Rajang River in Sarawak with a length of 560 kilometres. The river begins from the western ranges and snakes its way through the central region towards the east coast out into the Sulu Sea. Other major rivers including the Kalabakan River, Kolopis River, Liwagu River, Padas River, Paitan River, Segama River and Sugut River, in addition to Babagon River, Bengkoka River, Kadamaian River, Kalumpang River, Kiulu River, Mawao River, Membakut River, Mesapol River, Nabawan River, Papar River, Pensiangan River, Tamparuli River and Wario River.

The land of Sabah is located in a tropical geography with equatorial climate. It experiences two monsoon seasons of northeast and southwest. The northeast monsoon occurs from November to March with heavy rains, while the southwest monsoon prevails from May to September with less rainfall. It also received two inter-monsoon season from April to May and September to October. The average daily temperature varies from 27 °C (81 °F) to 34 °C (93 °F), with a considerable amount of rain from 1,800 millimetres to 4,000 millimetres. The coastal areas occasionally experience severe storms as the state is situated south of the typhoon belt. Due to its location is very close to the typhoon belt, Sabah experience the worst Tropical Storm Greg on 25 December 1996. The storm left more than 100 people dead, with another 200–300 missing, 3,000–4,000 people left homeless. As Sabah also lies within the Sunda Plate with a compression from the Australian and Philippine Plate, it is prone to earthquake with the state itself have experienced three major earthquakes since 1923, with the 2015 earthquake being the latest major earthquake. The Crocker Ranges together with Mount Kinabalu was formed since during the middle Miocene period after been uplifted by the Sabah Orogeny through compression. 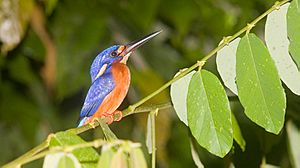 Blue-eared kingfisher in the lower Kinabatangan River area, which is endemic to the island of Borneo. Kingfisher is also once a state bird of Sabah and featured in one of its coat of arms.

The jungles of Sabah host a diverse array of plant and animal species. Most of Sabah's biodiversity is located in the forest reserve areas, which formed half of its total landmass of 7.34 million hectares. Its forest reserve are part of the 20 million hectares equatorial rainforests demarcated under the "Heart of Borneo" initiative. The forests surrounding the river valley of Kinabatangan River is the largest forest-covered floodplain in Malaysia. The Crocker Range National Park is the largest national park in the state, covering an area of 139,919 hectares. Most of the park area are covered in dense forest and important as a water catchment area with its headwater connecting to five major rivers in the west coast area. Kinabalu National Park was inscribed as a World Heritage Site by UNESCO in 2000 for its richness in plant diversity combined with its unique geological, topographical, and climatic conditions. The park hosts more than 4,500 species of flora and fauna, including 326 bird and around 100 mammal species along with over 110 land snail species. 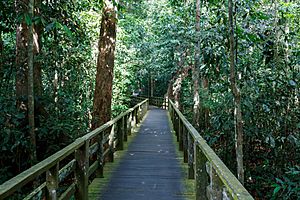 A walkout through the Sepilok Orang Utan Rehabilitation Centre.

Tiga Island is formed through the eruption of mud volcano in 1897. The island is now part of the Tiga Island National Park together with Kalampunian Besar and Kalampunian Damit islands as a tourist attractions, with a mud bath tourism. The Tunku Abdul Rahman National Park is a group of five islands of Gaya, Manukan, Mamutik, Sapi and Sulug. These islands are believed to once connected to the Crocker Range but separated when sea levels rose since the last ice age. The Tun Mustapha Marine Park is the largest marine park located in the north of Sabah. It covers the three major islands of Banggi, Balambangan and Malawali. Another marine park is the Tun Sakaran Marine Park located in the south-east of Sabah. The park comprising the islands of Bodgaya, Boheydulang, Sabangkat and Salakan along with sand cays of Maiga, Mantabuan and Sibuan. Bodgaya is gazetted as a forest reserve, while Boheydulang as a bird sanctuary. These islands are formed by Quaternary pyroclastic material that was ejected during explosive volcanic activities.

The Tawau Hills National Park established as a natural water catchment area. The park contains rugged volcanic landscapes including a hot spring and spectacular waterfalls. Bordering the Philippine Turtle Islands is the Turtle Islands National Park, it consists of three islands of Selingaan, Bakkungan Kechil and Gulisaan which is notable as the nesting place for green turtle and hawksbill sea turtle. Other important wildlife regions in Sabah include the Maliau Basin, Danum Valley, Tabin, Imbak Canyon and Sepilok. These places are either designated as national parks, wildlife reserves, virgin jungle reserves, or protection forest reserve. Beyond the coasts of Sabah lie a number of islands rich with coral reefs such as Ligitan, Sipadan, Selingaan, Tiga and Layang-Layang (Swallow Reef). Other main islands including the Jambongan, Timbun Mata, Bum Bum and the divided Sebatik. The Sabah state government has enacted several laws to protect its forests and endangered wildlife species under the Animals Ordinance 1962, Forest Enactment 1968 and the Wildlife Conservation Enactment 1997 among others. Under the Wildlife Conservation Enactment, any persons hunting inside conservation lands are liable for imprisonment for five years and fined with RM50,000. The state government also plans to implement seasonal huntings as part of its conservation efforts to prevent the continuous lose of its endangered wildlife species while maintaining the state indigenous hunting traditions.

All content from Kiddle encyclopedia articles (including the article images and facts) can be freely used under Attribution-ShareAlike license, unless stated otherwise. Cite this article:
Sabah Facts for Kids. Kiddle Encyclopedia.