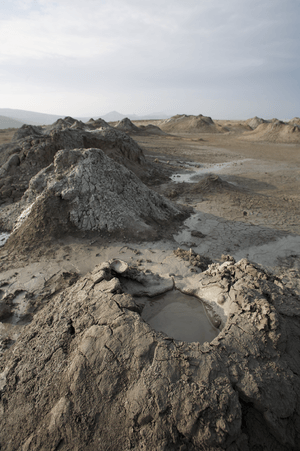 A mud volcano is usually made by mud diapir that breaks out of the surface of the Earth or on the ocean bottom. Temperatures in mud volcanoes can be as low as the freezing point.

Around 1,100 mud volcanoes have been found on land and in shallow water. People think that more than 10,000 mud volcanoes may exist on continental slopes and abyssal plains.

Features and what they give off

There are many features of mud volcanoes. One of these features is the gryphon, which is a steep, short cone that gives off mud. Another feature is the mud cone, which is a tall cone that makes mud and small pieces of rock. The scoria cone is a cone that is made when deposits of mud are heated up and the salse, which are pools of water that leak gases out of them. Mud volcanoes have many other features, but most of these are notable.

Most of the things that mud volcanoes spit out happen during volcanic eruptions. Other eruptions have been known to happen during the time when a volcano is dormant or sleeping.

All content from Kiddle encyclopedia articles (including the article images and facts) can be freely used under Attribution-ShareAlike license, unless stated otherwise. Cite this article:
Mud volcano Facts for Kids. Kiddle Encyclopedia.