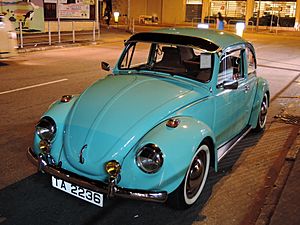 The Volkswagen Beetle is a car manufactured by the Volkswagen company. It was designed by Dr. Ferdinand Porsche. When it was introduced, it had gone through over a million miles of testing - more than any other car at the time.

The basic shape and design of the car did not change. It was also powered by an engine in the rear, had a small trunk up front, and was air-cooled (no radiator).

More recently, the company made the New Beetle, which looked similar, followed by the present-day Beetle from 2012. These are completely different cars however, since they have a water-cooled engine in the front, and are very similar underneath to the Volkswagen Golf.

There are many Volkswagen clubs around the world, the members restore or modify the original air-cooled Volkswagens.

Disney made a series of films about a Beetle called Herbie.

All content from Kiddle encyclopedia articles (including the article images and facts) can be freely used under Attribution-ShareAlike license, unless stated otherwise. Cite this article:
Volkswagen Beetle Facts for Kids. Kiddle Encyclopedia.