Container ships (sometimes spelled containerships) are cargo ships that carry all of their load in truck-size intermodal containers, in a technique called containerization. They are a common means of commercial intermodal freight transport and now carry most seagoing non-bulk cargo.

Container ship capacity is measured in twenty-foot equivalent units (TEU). Typical loads are a mix of 20-foot and 40-foot (2-TEU) ISO-standard containers, with the latter predominant.

Today, about 90% of non-bulk cargo worldwide is transported by container, and modern container ships can carry over 19,000 TEU (e.g., MSC Zoe). Container ships now rival crude oil tankers and bulk carriers as the largest commercial vessels on the ocean. 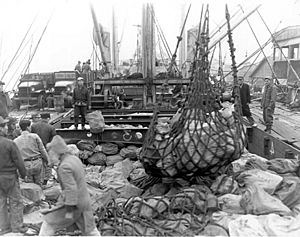 There are two main types of dry cargo: bulk cargo and break bulk cargo. Bulk cargoes, like grain or coal, are transported unpackaged in the hull of the ship, generally in large volume. Break-bulk cargoes, on the other hand, are transported in packages, and are generally manufactured goods. Before the advent of containerization in the 1950s, break-bulk items were loaded, lashed, unlashed and unloaded from the ship one piece at a time. However, by grouping cargo into containers, 1,000 to 3,000 cubic feet (28 to 85 m3) of cargo, or up to about 64,000 pounds (29,000 kg), is moved at once and each container is secured to the ship once in a standardized way. Containerization has increased the efficiency of moving traditional break-bulk cargoes significantly, reducing shipping time by 84% and costs by 35%. In 2001, more than 90% of world trade in non-bulk goods was transported in ISO containers. In 2009, almost one quarter of the world's dry cargo was shipped by container, an estimated 125 million TEU or 1.19 billion metric tons worth of cargo.

The first ships designed to carrying standardized load units were use in the late 18th century in England. In 1766 James Brindley designed the box boat "Starvationer" with 10 wooden containers, to transport coal from Worsley Delph to Manchester by Bridgewater Canal. Before the Second World War first container ships were used to carrying baggages of the luxury passenger train from London to Paris, Golden Arrow/Fleche d'Or, in 1926 by Southern Railway. These containers were loaded in London or Paris and carried to ports, Dover or Calais, on flat cars in the UK and "CIWL Pullman Golden Arrow Fourgon of CIWL" in France.

The earliest container ships after the Second World War were converted to tankers, built up from surplus T2 tankers after World War II. In 1951, the first purpose-built container vessels began operating in Denmark, and between Seattle and Alaska. The first commercially successful container ship was Ideal X, a T2 tanker, owned by Malcom McLean, which carried 58 metal containers between Newark, New Jersey and Houston, Texas on its first voyage. In 1955, McLean built his company, McLean Trucking into one of United States' biggest freighter fleets. In 1955, he purchased the small Pan Atlantic Steamship Company from Waterman Steamship and adapted its ships to carry cargo in large uniform metal containers. On April 26, 1956, the first of these rebuilt container vessels, the Ideal X, left the Port Newark in New Jersey and a new revolution in modern shipping resulted.

Container vessels eliminate the individual hatches, holds and dividers of the traditional general cargo vessels. The hull of a typical container ship is a huge warehouse divided into cells by vertical guide rails. These cells are designed to hold cargo in pre-packed units – containers. Shipping containers are usually made of steel, but other materials like aluminum, fiberglass or plywood are also used. They are designed to be entirely transferred to and from smaller coastal carriers, trains, trucks and/or semi-trailers (and so are carried by different modes of transport during one voyage, thus giving the name intermodal transport) There are several types of containers and they are categorized according to their size and functions.

Today, about 90% of non-bulk cargo worldwide is transported by container, and modern container ships can carry up to 19,224 twenty-foot equivalent units (TEU) (MSC Oscar). As a class, container ships now rival crude oil tankers and bulk carriers as the largest commercial vessels on the ocean.

Containerization changed not only the face of shipping, but it also revolutionized world trade as well. A container ship can be loaded and unloaded in a few hours compared to days in a traditional cargo vessel. This, besides cutting labor costs, has reduced shipping times between ports to a great extent; for example, it takes a few weeks instead of months for a consignment to be delivered from India to Europe and vice versa. It has also resulted in less breakage due to less handling; also, there is less danger of cargo shifting during a voyage. As containers are sealed and only opened at the destination, pilferage and theft levels have been greatly reduced. 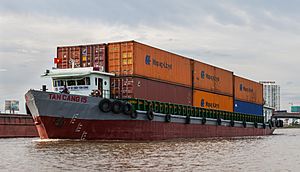 Containerization has lowered shipping expense and decreased shipping time, and this has in turn helped the growth of international trade. Cargo that once arrived in cartons, crates, bales, barrels or bags now comes in factory sealed containers, with no indication to the human eye of their contents, except for a product code that machines can scan and computers trace. This system of tracking has been so exact that a two-week voyage can be timed for arrival with an accuracy of under fifteen minutes. It has resulted in such revolutions as on time guaranteed delivery and just in time manufacturing. Raw materials arrive from factories in sealed containers less than an hour before they are required in manufacture, resulting in reduced inventory expense. 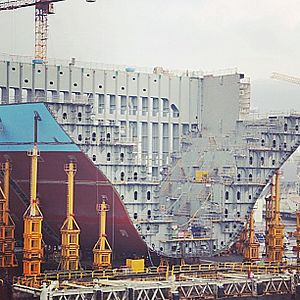 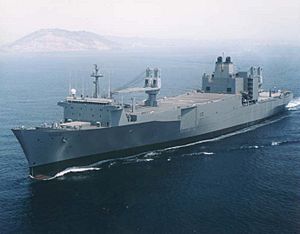 There are several key points in the design of modern container ships. The hull, similar to bulk carriers and general cargo ships, is built around a strong keel. Into this frame is set one or more below-deck cargo holds, numerous tanks, and the engine room. The holds are topped by hatch covers, onto which more containers can be stacked. Many container ships have cargo cranes installed on them, and some have specialized systems for securing containers on board.

The hull of a modern cargo ship is a complex arrangement of steel plates and strengthening beams. The hull is built around the keel. Resembling ribs, and fastened at right-angles to the keel are the ship's frames. The ship's main deck, the metal platework that covers the top of the hull framework, is supported by beams that are attached to the tops of the frames and run the full breadth of the ship. The beams not only support the deck, but along with the deck, frames, and transverse bulkheads, strengthen and reinforce the shell. Another feature of recent hulls is a set of double-bottom tanks, which provide a second watertight shell that runs most of the length of a ship. The double-bottoms generally hold liquids such as fuel oil, ballast water or fresh water.

A ship's engine room houses its main engines and auxiliary machinery such as the fresh water and sewage systems, electrical generators, fire pumps, and air conditioners. In most new ships, the engine room is located in the aft portion of the ship.

Container ships are distinguished into 7 major size categories: small feeder, feeder, feedermax, Panamax, Post-Panamax, New Panamax and ultra-large. As of December 2012, there were 161 container ships in the VLCS class (Very Large Container Ships, more than 10,000 TEU), and 51 ports in the world can accommodate them. 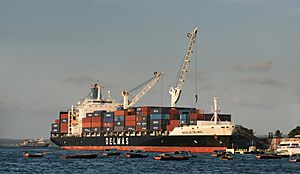 A Delmas container ship unloading at the Zanzibar port in Tanzania

Until the 1950s, hatches were typically secured with wooden boards and tarpaulins held down with battens. Today, some hatch covers can be solid metal plates that are lifted on and off the ship by cranes, while others are articulated mechanisms that are opened and closed using powerful hydraulic rams.

Another key component of dedicated container-ship design is the use of cell guides. Cell guides are strong vertical structures constructed of metal installed into a ship's cargo holds. These structures guide containers into well-defined rows during the loading process and provide some support for containers against the ship's rolling at sea. So fundamental to container ship design are cell guides that organizations such as the United Nations Conference on Trade and Development use their presence to distinguish dedicated container ships from general break-bulk cargo ships.

A system of three dimensions is used in cargo plans to describe the position of a container aboard the ship. The first coordinate is the BAY, which starts at the front of the ship and increases aft. The second coordinate is "TIER" , with the first tier at the bottom of the cargo holds, the second tier on top of that, and so forth. The third coordinate is the ROW. Rows on the starboard side are given odd numbers and those on the port side are given even numbers. The rows nearest the centerline are given low numbers, and the numbers increase for slots further from the center line.

All content from Kiddle encyclopedia articles (including the article images and facts) can be freely used under Attribution-ShareAlike license, unless stated otherwise. Cite this article:
Container ship Facts for Kids. Kiddle Encyclopedia.