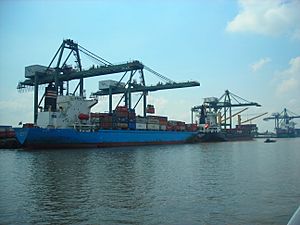 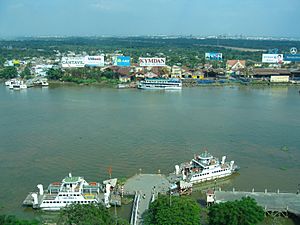 Ferry crossing on the Saigon River.

The Saigon River (Vietnamese: Sông Sài Gòn) is a river in Vietnam. It begins at Lake Dau Tieng (in its water-catchment area) near the country of Cambodia.

The river flows south and south-southeast for about 150 kilometres (93 mi). Most of the rivers in the Mekong Delta region have a water-table and canal connection. The system of rivers and canals for southern Vietnam help with water transport for commercial activities. The water supplies many businesses and agricultural (farm) operations.

The Saigon River has a river port at Ho Chi Minh City. It ends just after the Phu My Bridge (Vietnamese: Cầu Phú Mỹ). The Saigon River ends by meeting another two rivers, the Nha Be and Dong Nai rivers. The lower end of the river is on the flood plain, and is therefore subject to tide change from the sea and delta. Ho Chi Minh City regularly floods (in areas that get a lot of floods) with either tidewater or rainwater.

The river system has many fish. Recently the government released native fish to improve the population. Fish, shrimp, and snails are popular for farming.

All content from Kiddle encyclopedia articles (including the article images and facts) can be freely used under Attribution-ShareAlike license, unless stated otherwise. Cite this article:
Saigon River Facts for Kids. Kiddle Encyclopedia.