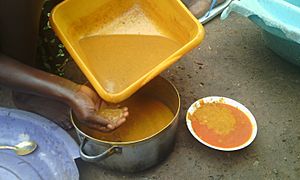 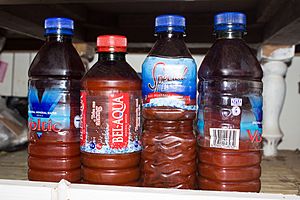 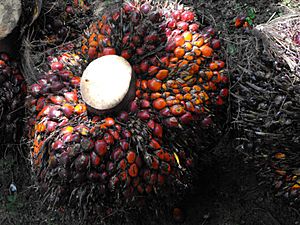 Palm oil is an edible vegetable oil derived from the mesocarp (reddish pulp) of the fruit of the oil palms, primarily the African oil palm, and to a lesser extent from the American oil palm and the maripa palm.

Palm oil is naturally reddish in color because of a high beta-carotene content. It is not to be confused with palm kernel oil derived from the kernel of the same fruit or coconut oil derived from the kernel of the coconut palm. The differences are in color (raw palm kernel oil lacks carotenoids and is not red), and in saturated fat content: palm mesocarp oil is 49% saturated, while palm kernel oil and coconut oil are 81% and 86% saturated fats, respectively. However, crude red palm oil that has been refined, bleached and deodorized, a common commodity called RBD palm oil, does not contain carotenoids.

Many industrial food applications of palm oil use fractionated components of palm oil (often listed as "modified palm oil") whose saturation levels can reach 90%; these "modified" palm oils can become highly saturated, but are not necessarily hydrogenated.

The oil palm produces bunches containing a large number of fruits with the fleshy mesocarp enclosing a kernel that is covered by a very hard shell. FAO considers palm oil (coming from the pulp) and palm kernels to be primary products. The oil extraction rate from a bunch varies from 17 to 27% for palm oil, and from 4 to 10% for palm kernels.

Along with coconut oil, palm oil is one of the few highly saturated vegetable fats and is semisolid at room temperature. Palm oil is a common cooking ingredient in the tropical belt of Africa, Southeast Asia and parts of Brazil. Its use in the commercial food industry in other parts of the world is widespread because of its lower cost and the high oxidative stability (saturation) of the refined product when used for frying. One source reported that humans consumed an average 17 pounds (7.7 kg) of palm oil per person in 2015.

The use of palm oil in food products has attracted the concern of environmental activist groups; the high oil yield of the trees has encouraged wider cultivation, leading to the clearing of forests in parts of Indonesia to make space for oil-palm monoculture. This has resulted in significant acreage losses of the natural habitat of the three surviving species of orangutan. One species in particular, the Sumatran orangutan, has been listed as critically endangered.

In 2004, an industry group called the Roundtable on Sustainable Palm Oil was formed to work with the palm oil industry to address these concerns. Additionally, in 1992, in response to concerns about deforestation, the Government of Malaysia pledged to limit the expansion of palm oil plantations by retaining a minimum of half the nation's land as forest cover.

All content from Kiddle encyclopedia articles (including the article images and facts) can be freely used under Attribution-ShareAlike license, unless stated otherwise. Cite this article:
Palm oil Facts for Kids. Kiddle Encyclopedia.