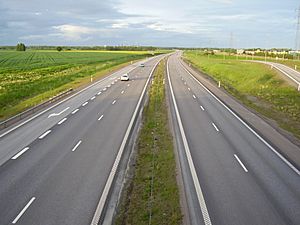 A motorway in Sweden 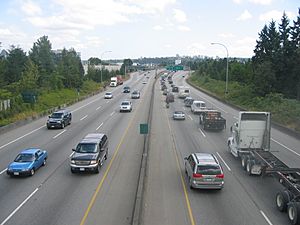 A freeway in Canada

A controlled-access highway, known by various terms worldwide, including autobahn, autopista, autoroute, autostrada, freeway, motorway and sometimes expressway, is a highway designed and built specifically for high-speed vehicular traffic. Its primary purpose is to provide an unhindered flow of traffic, with no traffic signals, intersections or property access. Access is provided by slip roads or ramps, which allow for acceleration and deceleration between the highway and arterial thoroughfares and collector roads.

The opposing directions of travel are separated in some form, either by a strip of grass or boulders, or by a wooden, metal or concrete barrier, referred to as a median or central reservation. A controlled-access highway is free of any at-grade crossings with other roads, railways or pedestrian paths; overpasses and underpasses provide access across the highway.

Germany pioneered the controlled-access highway (then referred to as a Dual Highway) following the First World War and rapidly assembled a sprawling network of Autobahns in anticipation of their use in the war effort. Italy followed shortly thereafter, opening its first Autopista in 1925.

In North America, a similar concept, known as a parkway, was developed on Long Island. These parkways did not perform the same function as a modern highway, but were divided and designed specifically for automobiles. Ontario and Pennsylvania opened the first North American freeways in 1940. Britain, heavily influenced by the railroad, did not build its first motorway until the mid-1950s.

Today, most industrialized nations feature an extensive network of freeways or motorways. Many have a national-level system of route numbering. The highway has brought with it the ability to access almost any part of the world with comfort and speed, but has mired controversy over the pollution, degradation to farmland and urban sprawl with which it has been associated. 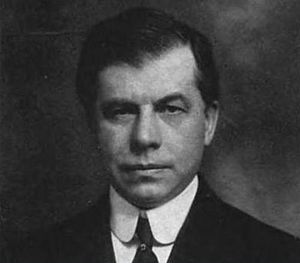 The word freeway was coined by the "Father of American Zoning," Edward M. Bassett, in an influential article published in February 1930. Bassett argued that roads should be classified into three basic types: highways, parkways, and freeways.

Modern controlled-access highways originated in the early 1920s in response to the rapidly increasing use of the automobile, the demand for faster movement between cities and as a consequence of improvements in paving processes, techniques and materials. These original high-speed roads were referred to as "dual highways" and, while divided, bore little resemblance to the highways of today.

The first dual highway in the world opened in 1921 between Milan and Varese and now forms parts of the A8 and A9 motorways. This highway, while divided, featured only one lane in each direction and no interchanges. Shortly thereafter, in 1924, the Bronx River Parkway was opened to traffic.

The Bronx River Parkway was the first road in North America to utilize a median strip to separate the opposing lanes, to be constructed through a park and where intersecting streets crossed over bridges. 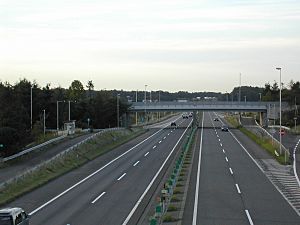 These kinds of highways have four lanes or more. They carry many vehicles. They have no traffic-lights or ground level intersections. All roads crossing the highway go over a bridge or a tunnel. Ramps connect the highways to smaller roads and other highways. The place where highways meet these roads are called junctions or interchanges. Places where cars can leave or enter the motorway are called exits. Many freeways do not allow slower traffic, such as bicycles and pedestrians, to enter them.

Most controlled-access highways are divided with at least two lanes going each way, but they can be as wide as four lanes in large cities.

Controlled-access highways have been constructed both between urban centres and within them, leading to the sprawling suburban development found near most modern cities. They ideally serve to reduce travel times and accident rates, though the higher speeds have increased the severity and death rates of the collisions that do occur.

Highways have been heavily criticized by environmentalists, urbanists, and preservationists for the noise, pollution, and economic shifts they bring. Additionally, they have been criticized by the driving public for the inefficiency with which they handle peak hour traffic. 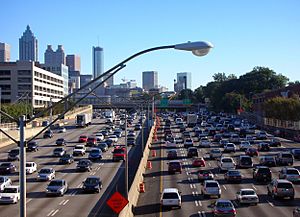 The "Downtown Connector" (I-75 and I-85) in Atlanta, Georgia, United States, during rush hour

Construction of urban freeways for the U.S. Interstate Highway System, which began in the late 1950s, led to the demolition of thousands of city blocks, and the dislocation of many more thousands of people. The citizens of many inner city areas responded with the freeway and expressway revolts. Through the study of Washington's response, it can be shown that the most effective changes came not from executive or legislative action, but instead from policy implementation. One of the foremost rationales for the creation of the U.S. Department of Transportation (DOT) was that an agency was needed to mediate between the conflicting interests of interstates and cities. Initially, these policies came as regulation of the state highway departments. Over time, DOT officials re-focused highway building from a national level to the local scale. With this shift of perspective came an encouragement for alternative transportation, and locally based planning agencies. 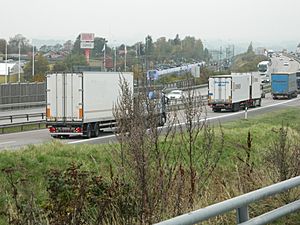 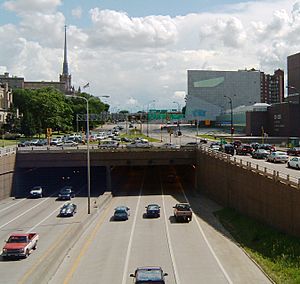 Interstate 94 entering the Lowry Hill Tunnel in Minneapolis, Minnesota, US

Beginning in the early 1970s, the U.S. Congress identified freeways and other urban highways as responsible for most of the noise exposure of the U.S. population. Subsequently, computer models were developed to analyze freeway noise and aid in their design to help minimize noise exposure.

Some cities have implemented freeway removal policies in which freeways have even been demolished and reclaimed as boulevards or parks, notably in Portland (Harbor Drive), New York City (West Side Highway), Boston (Central Artery), San Francisco (Embarcadero Freeway) and Milwaukee (Park East Freeway).

An alternative to surface or above ground freeway construction has been the construction of underground urban freeways using tunnelling technologies. This has been extremely successful in the Australian cities of Sydney (which has five such freeways) and Melbourne (which has two such freeways). This has had the benefit of removing traffic from surface roads and in the case of Melbourne's Eastlink Motorway, has helped preserve an ecologically sensitive area from destruction.

Other Australian cities face similar problems (lack of available land, cost of home acquisition, aesthetic problems, and community opposition). Brisbane, which also has to contend with physical boundaries (the river) and heavy population increases, has embraced underground tunnel freeways. There are currently three under active development, one of which (the North-South Bypass Tunnel) is currently under construction. All of the planned tunnels include provisions for public transport, whether underground or in reclaimed space on the surface.

All content from Kiddle encyclopedia articles (including the article images and facts) can be freely used under Attribution-ShareAlike license, unless stated otherwise. Cite this article:
Controlled-access highway Facts for Kids. Kiddle Encyclopedia.