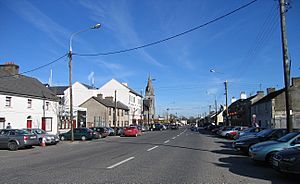 Kinnegad or Kinagad (Irish: Cionn Átha Gad, meaning "‘the head of the ford of withes") is a town in County Westmeath, Ireland. It is on the border with County Meath, at the junction of the N6 and the N4 - two of Ireland's main east-west roads. It is roughly 60 km from the capital, Dublin.

During the first decade of the 21st century there was considerable construction in Kinnegad which included a shopping centre, housing estates and a 48-room hotel which stands on the site of a former pub, "Harry's of Kinnegad". Tesco Ireland opened a new supermarket in the town in late 2010.

The town has a large national school, St. Etchen's Kinnegad N.S. The school consists of two separate buildings, Scoil Etchen Naofa (built in 1984) and the Cardinal Glennon building (built in 2008). Renovation was necessary due to an increase in population. The school now caters for up to 560 young people each day. It is run by the Catholic Church but non-Catholic children can attend the school.

Kinnegad is home to many Dubliners who commute to Dublin via the N4 and the M4 motorway. There is no Railway station in the town, but was served by the station at Hill of Down (which was originally called Kinnegad and Ballivor) until its closure in 1962. There are rumours of it reopening but this is unlikely before extra capacity is available on the line.

The Catholic Church of St. Mary's is located in Kinnegad. It is part of the Diocese of Meath, the bishop of which is Michael Smith. The parish priests of Kinnegad are Monsignor Eamonn Marron and Father Tom Gilroy. There are bullet holes visible in the stations of the cross in the church which were made by the Black and Tans in the 1920s. The church building is the tallest in the town, although the Lagan Cement facility which is outside the town at Killiskillen, is taller.

All content from Kiddle encyclopedia articles (including the article images and facts) can be freely used under Attribution-ShareAlike license, unless stated otherwise. Cite this article:
Kinnegad Facts for Kids. Kiddle Encyclopedia.