Provinces of Ireland facts for kids

Kids Encyclopedia Facts
For ecclesiastical provinces, see List of Roman Catholic dioceses in Ireland and List of Anglican dioceses in the United Kingdom and Ireland.

Ireland has historically been divided into four provinces: Connacht, Leinster, Munster and Ulster. The Irish word for this territorial division, cúige, literally meaning "fifth part", indicates that there were once five; the fifth province, Meath, was incorporated into Leinster, with parts going to Ulster. The provinces of Ireland serve no administrative or political purposes, but function as historical and cultural entities.

The origins of these provinces (loosely federated kingdoms with somewhat flexible boundaries), of which there were five before the Norman invasion, can be traced to the over-riding influence exerted in their respective territories by the great Irish dynastic families of Uí Néill/O'Neill (Ulster), Uí Máeilsheáchlainn/O'Melaghlin (Mide), Uí Briain/O'Brien (Munster), Uí Conchobhair/O'Conor (Connacht) and Mac Murchadha-Caomhánach/MacMurrough-Kavanagh (Leinster). A "king of over-kings", a rí ruirech was often a provincial (rí cóicid) or semi-provincial king to whom several ruiri were subordinate. Entities belonging to the 1st and 2nd millennia are listed. These do not all belong to the same periods. Over the centuries, the number of provincial kings varied between three and six. No more than six genuine rí ruirech were ever contemporary, with the average being three or four. Also, following the Norman invasion, the situation became somewhat more condensed and complicated than previously. The Norman invasion began in 1169, and the Normans went on to occupy Ireland until 1541.

In the post-Norman period the historic provinces of Leinster and Meath gradually merged, mainly due to the impact of the Pale, which straddled both, thereby forming the present-day province of Leinster. In the early Irish annals these five ancient political divisions were referred to as cúigí ("fifths") such as the fifth of Munster, the fifth of Ulster and so on. Later record-makers dubbed them provinces, in imitation of the Roman imperial provinciae.

In modern times they have become associated with groups of counties, although they have no legal status. They are today seen mainly in a sporting context, as Ireland's four professional rugby teams play under the names of the provinces, and the Gaelic Athletic Association has separate GAA provincial councils and Provincial championships.

The provinces were supplanted by the present system of counties after the Norman invasion. During the Tudor conquest, and for about a century after, provincial Presidencies existed in Connacht and Munster, serving a primarily military role. 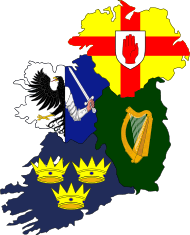 This dinnseanchas poem named Ard Ruide (Ruide Headland) poetically describes the kingdoms of Ireland. Below is a translation from Old Irish:

Connacht in the west is the kingdom of learning, the seat of the greatest and wisest druids and magicians; the men of Connacht are famed for their eloquence, their handsomeness and their ability to pronounce true judgement.

Ulster in the north is the seat of battle valour, of haughtiness, strife, boasting; the men of Ulster are the fiercest warriors of all Ireland, and the queens and goddesses of Ulster are associated with battle and death.

Leinster, the eastern kingdom, is the seat of prosperity, hospitality, the importing of rich foreign wares like silk or wine; the men of Leinster are noble in speech and their women are exceptionally beautiful.

Munster in the south is the kingdom of music and the arts, of harpers, of skilled ficheall players and of skilled horsemen. The fairs of Munster were the greatest in all Ireland.

The last kingdom, Meath, is the kingdom of Kingship, of stewardship, of bounty in government; in Meath lies the Hill of Tara, the traditional seat of the High King of Ireland. The ancient earthwork of Tara is called Rath na Ríthe ('Ringfort of the Kings').

All content from Kiddle encyclopedia articles (including the article images and facts) can be freely used under Attribution-ShareAlike license, unless stated otherwise. Cite this article:
Provinces of Ireland Facts for Kids. Kiddle Encyclopedia.