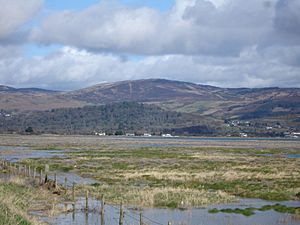 County Louth (Irish: Contae Lú) is a county in Ireland. It is in the province of Leinster and is part of the Border Region. It is named after the village of Louth. Louth County Council is the local authority for the county. The population of the county is 122,897 according to the 2016 census.

County Louth is colloquially known as 'the Wee County' as it is Ireland's smallest county by area (826 km2 (319 mi2). It is the 18th-largest in terms of population. It is the smallest of Leinster’s 12 counties by size and the sixth-largest by population.

Despite its fairly average total population, Louth is the second most densely populated county in Ireland behind Dublin, and the fourth on the island of Ireland, due to its small size. 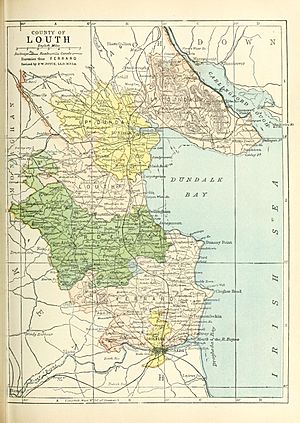 County Louth is named after the village of Louth, which in turn is named after Lugh, a god of the ancient Irish. Historically, the placename has had various spellings; "Lugmad", "Lughmhaigh", and "Lughmhadh" (see Historic Names List, for full listing). Lú is the modern simplified spelling.

The county is steeped in myth, legend and history, and is a setting in the Táin Bó Cúailnge. Later it saw the influence of the Vikings as seen in the name of Carlingford Lough. They also established a longphort at Annagassan in the ninth century. At this time Louth consisted of three sub-kingdoms each subject to separate over-kingdoms: Conaille (Ulaidh); Fir Rois (Airgialla); and, the Fir Arda Ciannachta (Midhe). The whole area became part of the O'Carroll Kingdom of Airgialla (Oriel) early in the 12th century.

A number of historic sites are in the county, including religious sites at Monasterboice, Mellifont Abbey and the St Mary Magdalene Dominican Friary.

The Normans occupied the Louth area in the 1180s, and it became known as 'English' Oriel, to distinguish it from the remainder ('Irish' Oriel) which remained in Irish hands. The latter became the McMahon lordship of Oriel of Monaghan.

In the early 14th century, the Scottish army of Edward Bruce was repulsed from Drogheda. Edward was finally defeated, losing his claim to the High Kingship of Ireland along with his life, in the Battle of Faughart near Dundalk, by a chiefly local force led by John de Bermingham.

In 1189 AD, a royal charter was granted to Dundalk after a Norman nobleman named Bertram de Verdun erected a manor house at Castletown Mount. Later in 1412 , a royal charter was granted to Drogheda. This charter unified the towns of Drogheda-in-Meath and Drogheda-in-Uriel (Louth) as a County in its own right, styled as ‘the County of the town of Drogheda’. Drogheda continued as a County Borough until the setting up of County Councils, through the enactment of the Local Government (Ireland) Act 1898, which saw all of Drogheda, including a large area south of the River Boyne, become part of an extended County Louth.

Until the late 16th century, Louth had been a part of Ulster, before being included as part of Leinster after a conference held at Faughart (in 1596) between the Chiefs of Ulster (O'Nial/O'Niel and O'Donel/McDonnel), on the Irish side, and the Archbishop of Cashel and the Earl of Ormonde on that of the English.

The 16th and 17th centuries featured many skirmishes and battles involving Irish and English forces, as it was on the main route to 'the Moiry Pass' and the Ulster areas often in rebellion and as yet uncolonised. Oliver Cromwell attacked Drogheda in 1649 slaughtering the Royalist garrison and hundreds of the town's citizens. Towards the end of the same century, the armies of the warring Kings, James and William, faced off in South Louth during the build-up to the Battle of the Boyne the battle was fought 3 km west Drogheda. Drogheda held for James II under Lord Iveagh, but surrendered to King William (III) of Orange the day after the battle of the Boyne.

In 1798, the leaders of the United Irishmen included Bartholomew Teeling, John Byrne, and Patrick Byrne, all from Castletown; Anthony Marmion from Louth Town and Dundalk, Anthony McCann from Corderry; Nicholas and Thomas Markey from Barmeath, and Arthur McKeown, John Warren, and James McAllister from Cambricville. They were betrayed by informers, notably a Dr. Conlan, who came from Dundalk, and an agent provocateur called Sam Turner, from Newry. Several leaders were hanged.

County Louth is the 19th largest county in terms of population yet it is the most densely populated county in Ireland outside of Dublin with a population density of 148.7 people per km², almost double that of the national average. The majority of the county's 122,897 population live in either Dundalk in North Louth, or Drogheda in South Louth. The 2011 Census confirmed Drogheda and Dundalk as not only the largest towns in the county, but also the largest and second largest towns and overall 6th and 7th largest urban areas in Ireland.

The area of Omeath was Irish-speaking until the early 20th century. A native dialect of Louth Irish existed there until about 1930, but is now extinct, although recordings have been made. Within the county 1,587 people use Irish on a daily basis outside of the education system according to the 2011 census.

All content from Kiddle encyclopedia articles (including the article images and facts) can be freely used under Attribution-ShareAlike license, unless stated otherwise. Cite this article:
County Louth Facts for Kids. Kiddle Encyclopedia.