County Down facts for kids

County Down (named after its county town, Downpatrick) is one of six counties that form Northern Ireland, situated in the northeast of the island of Ireland. Adjoined to the southeast shore of Lough Neagh, the county covers an area of 2,448 km² (945 sq mi) and has a population of about 531,665. It is also one of the thirty-two traditional counties of Ireland and is within the province of Ulster.

The county was archaically called Downshire. It borders County Antrim to the north, the Irish Sea to the east and south, County Armagh to the west, and County Louth across Carlingford Lough to the southwest. In the east of the county is Strangford Lough and the Ards Peninsula. The largest town is Bangor, on the northeast coast. Three other large towns and cities are on its border: Newry lies on the western border with County Armagh, while Lisburn and Belfast lie on the northern border with County Antrim. Down contains both the southernmost point of Northern Ireland (Cranfield Point) and the easternmost point of Ireland (Burr Point).

It is currently one of only two counties of Ireland to have a majority of the population from a Protestant background, according to the 2001 census. The other is County Antrim to the north.

During the Williamite War in Ireland (1689–1691) the county was a centre of Protestant rebellion against the rule of the Catholic James II. After forming a scratch force the Protestants were defeated by the Irish Army at the Break of Dromore and forced to retreat, leading to the whole of Down falling under Jacobite control. Later the same year Marshal Schomberg's large Williamite expedition arrived in Belfast Lough and captured Bangor. After laying siege to Carrickfergus Schomberg marched south to Dundalk Camp, clearing County Down and much of the rest of East Ulster of Jacobite troops. 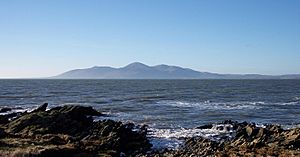 The county has a coastline along Belfast Lough to the north and Carlingford Lough to the south (both of which have access to the sea). Strangford Lough lies between the Ards Peninsula and the mainland. Down also contains part of the shore of Lough Neagh. Smaller loughs include Lough Island Reavy.

The River Lagan forms most of the border with County Antrim. The River Bann also flows through the southwestern areas of the county. Other rivers include the Clanrye and Quoile.

There are several islands off the Down coast: Mew Island, Light House Island and the Copeland Islands, all of which lie to the north of the Ards Peninsula. Gunn Island lies off the Lecale coast. In addition there are a large number of small islands in Strangford Lough.

County Down is where, in the words of the famous song by Percy French, "The mountains of Mourne sweep down to the sea", and the granite Mourne Mountains continue to be renowned for their beauty. Slieve Donard, at 849 m (2,785 ft), is the highest peak in the Mournes, in Northern Ireland and in the province of Ulster. Another important peak is Slieve Croob, at 534 m (1,752 ft), the source of the River Lagan.

Main page: List of civil parishes of County Down 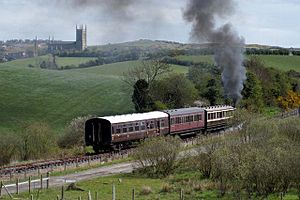 A steam train on the Downpatrick and County Down Railway travelling through the Ulster drumlin belt near Downpatrick.

"Star of the County Down" is a popular Irish ballad.

The Northern Irish singer Van Morrison has made reference to the County Down in the lyrics to several songs including "Northern Muse (Solid Ground)", "Mystic of the East" and the nostalgic "Coney Island", which names several places and landmarks in the County.

All content from Kiddle encyclopedia articles (including the article images and facts) can be freely used under Attribution-ShareAlike license, unless stated otherwise. Cite this article:
County Down Facts for Kids. Kiddle Encyclopedia.