Donaghadee ( DON-ə-KHƏ-dee, from Irish: Domhnach Daoi) is a small town in County Down, Northern Ireland. It lies on the northeast coast of the Ards Peninsula, about 18 miles (29 km) east of Belfast and about six miles (10 km) south east of Bangor. It is in the civil parish of Donaghadee and the historic barony of Ards Lower. It had a population of 6,869 people in the 2011 Census.

In the 17th century Ulster ports began to rise in prominence. In 1625 William Pitt was appointed as Customer of the ports of Newcastle, Dundrum, Killough, Portaferry, Donaghadee, Bangor and Holywood. In 1637 the Surveyor General of Customs issued a report compiled from accounts of customs due from each port and their "subsidiary creeks". Of the Ulster ports on the list, Carrickfergus was first, followed by Bangor, Donaghadee and Strangford.

The town also featured in the Irish Rebellion of 1798. On the morning of Pike Sunday, 10 June 1798 a force of United Irishmen, mainly from Bangor, Donaghadee, Greyabbey and Ballywalter attempted to occupy the town of Newtownards. They met with musket fire from the market house and were defeated.

Donaghadee was used in the 1759–1826 period by couples going to Portpatrick, Wigtown, Scotland to marry, as there was a daily packet boat. During this period, Portpatrick was known as the "Gretna Green for Ireland".

The lifeboat station at Donaghadee harbour, founded in 1910, is one of the most important on the Irish coast. RNLB Sir Samuel Kelly (ON 885) is a famous lifeboat once based in Donaghadee and now on show and preserved at the harbour for her gallant efforts over 50 years ago. On 31 January 1953 the lifeboat rescued 32 survivors in the Irish Sea from the stricken Larne–Stranraer car ferry, MV Princess Victoria.

Donaghadee is classified as a small town by the Northern Ireland Statistics and Research Agency (NISRA) (i.e. with population between 4,500 and 10,000 people). On Census day (29 April 2001) there were 6,470 people living in Donaghadee. Of these:

Donaghadee is probably best known for its lighthouse and harbour. For centuries, it has been a haven for ships, and the harbour has been there from at least the 17th century.

Sir Hugh Montgomery built a large stone quay to accommodate vessels ferrying between Scotland and Ireland from 1616 onwards. Viscount Montgomery's harbour (1626; improved 1640), superseding what had hitherto been probably only a small jetty, was built and maintained as a result of the Royal Warrant of 1616 which limited travel between the Ards and the Rhins of Galloway to this port, and that at Portpatrick also owned by Montgomery. It was described by Harris in 1744 as 'a curving quay about 400 feet (120 m) long and 22 feet (6.7 m) wide built of uncemented stones'. It ran from the shore at the north end of the Parade in a broad arc, bent against the open sea, towards the southern end of the present north pier. Much patched and decrepit, the quay was virtually rebuilt, though along the original line, between 1775 and 1785 by the landlord, Daniel Delacherois, probably with the help of John Smeaton, a civil engineer who had apparently made earlier more elaborate plans for extending the harbour, and had just rebuilt Portpatrick harbour.

The old quay remained until after the completion of the new harbour, and then, despite its continued favour by local fishermen, was removed for local wall building about 1833. (It appears in the 1832 drawing but not on the first O.S. map of 1834). The foundation stone of the new harbour was laid by the Marquess of Downshire on 1 August 1821. The initial plans and surveys for this ambitious undertaking were made by John Rennie Senior, the celebrated engineer whose works included Waterloo, Southwark and London Bridges over the Thames. He died within two months of work beginning, and was succeeded by his son, John, later Sir John Rennie, who had as his resident engineer a fellow Scot, the seasoned marine builder, David Logan, who had assisted Robert Stevenson at the Bell Rock Lighthouse (1807–1810).

The new harbour had to have greater depth to accommodate steam packets. Rock blasted from the sea bed, within the harbour area and further south in what became known as the Quarry Hole at Meetinghouse Point was used to form the outer slopes of the two piers; but the inner faces were built of limestone from the Moelfre quarries of Anglesea. This "Anglesea marble" lends itself to the finest ashlar dressing and the new piers remain a triumph of stone carving. The flights of steps display special skill in the deep diagonal binding of each solid step, providing a typically robust engineer's response to the wear of seaboots and waves alike. The harbour consists of two independent piers running north westwards out to sea; parallel nearer the shore, they converge at the outer ends to form a harbour mouth 150 feet (46 m) wide. At low tide the water in the harbour is fifteen feet deep.

The Moat in Donaghadee was built to house the explosives for the blasting involved in the construction of the harbour. It is one of the most prominent features of the town. The Motte, or the Moat as it is known, dates back to 1818. Today it is part of a park, giving views across the town and seawards towards the Copeland Islands. The original mound was of Norman origin, when a motte and bailey stood on the site. It was initially used as a defensive structure, and provided an excellent look-out post. 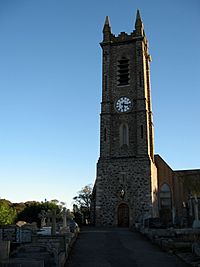 Visitors can also enjoy a number of scenic walks, including the marine walk at The Commons, which comprises a 16-acre (65,000 m2) semi-cultivated open space with bowls, tennis, putting and an adventure playground. Along the seafront is Pier 36, a restaurant and pub which has managed to accumulate a number of awards in its relatively short history including 2006's Pub of the Year in the awards organised by Federation of the Retail Licensed Trade. There are several pubs in the town, including Grace Neill's, opened in 1611 as the "King's Arms", and which claims to be the oldest bar in all of Ireland, a record, however, held by Sean's Bar in Athlone.

The Copeland Bird Observatory is situated on one of the three islands not far, and to be seen, from Donaghadee. It collects data on the migrating birds and by ringing them records the movements of the migratory species.http://www.thecbo.org.uk/

Donaghadee Choir was founded in 1932. It began as a small local chorus performing in churches and other local functions. The choir's reputation for excellence extends far beyond the shores of Northern Ireland and Great Britain. Today it is known internationally – having performed on stage, radio and television as far afield as the USA, Canada, Malta and Bulgaria, where it was the first choir from Ireland to perform behind the former Iron Curtain.

The Choir has been extremely successful in competition, chalking up over 40 firsts in the male voice and open sections of many prestigious festivals in Britain and Ireland. These include Whitby, Morecambe, Wharfedale, Cheltenham, Bangor, Coleraine and more recently, at the AIMS New Ross Festival, where it achieved one of the highest marks ever given. It has also competed at the world-famous International Eisteddfod in Wales. The choir celebrated its 75th anniversary during the 2007/08 season.

Donaghadee in the media

Donaghadee has facilities for a number of sports including cricket, tennis, bowling, darts, golf, women's hockey, football, sailing and rugby with teams that compete in various local leagues.

Donaghadee Rugby Football Club was formed in 1885 during a period of rapid growth for the game throughout Ireland. It was against that background that the new Donaghadee club, formed by the Rev. Coote, made its first match against Bangor on 7 November 1885. The game ended in a draw. The club's grounds are called Donaldson Park.

The golf club in Donaghadee was founded in 1899 and is part links and part open parkland. The club also provides catering facilities in the clubhouse. The golf club won its second all Ireland trophy in 2007. This was the Irish Club Youths. They then won their 3rd All Ireland Title in 2012.

Donaghadee Football Club are junior football who play their home matches at Crommelin Park in the town. For the 2014-15 season they were members of Division 2C of the Northern Amateur Football League. An earlier club of the same name held membership of the same league from 1948 to 1953. Donaghadee FC and Donaghadee 11s were both promoted from their respective leagues in 2016/17.

Donaghadee Ladies' Hockey Club has been around since pre-war times. They have two teams which play in Ulster Hockey leagues: The 1XI play in Senior League 3, while the 2XI are in Junior 8.

Other sports clubs include Donaghadee Cricket Club (a member of the NCU Senior League), and Donaghadee Sailing Club (which underwent redevelopment and in May 2009 with a new clubhouse opened).

All content from Kiddle encyclopedia articles (including the article images and facts) can be freely used under Attribution-ShareAlike license, unless stated otherwise. Cite this article:
Donaghadee Facts for Kids. Kiddle Encyclopedia.