The Arctic tern (Sterna paradisaea) is a medium-sized species of seabird. It breeds in the Arctic and sub-Arctic regions of Europe, Asia, and North America. The Arctic tern also has the longest migration of any known animal. It migrates 70,900 kilometres (44,100 mi) each year.

The Arctic tern is shown on the postage stamps of several countries and dependent territories. Examples are the Åland Islands, Alderney, and Faroe Islands and the countries include Canada, Finland, Iceland, and Cuba. 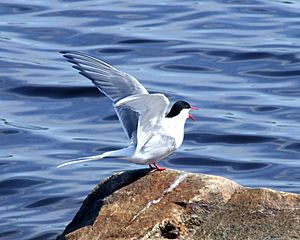 An Arctic Tern in Finland

The adult plumage is grey above, with a black nape and crown and white cheeks. The upperwings are pale grey, with the area near the wingtip being translucent. The tail is white, and the underparts pale grey. Both sexes are similar in appearance. The winter plumage is similar, but the crown is whiter and the bills are darker. 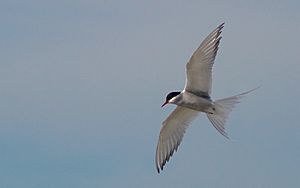 An Arctic Tern in flight with wings spread

The species has a variety of calls; the two most common being the alarm call, made when possible predators (such as humans or other mammals) enter the colonies, and the advertising call. The advertising call is social in nature, made when returning to the colony and during aggressive encounters between individuals. It is unique to each individual tern and as such it serves a similar role to the bird song of passerines, identifying individuals. Eight other calls have been described, from begging calls made by females during mating to attack calls made while swooping at intruders.

While the Arctic Tern is similar to the Common and Roseate Terns, its colouring, profile, and call are slightly different. Compared to the Common Tern, it has a longer tail and mono-coloured bill, while the main differences from the Roseate are its slightly darker colour and longer wings. The Arctic Tern's call is more nasal and rasping than that of the Common, and is easily distinguishable from that of the Roseate. 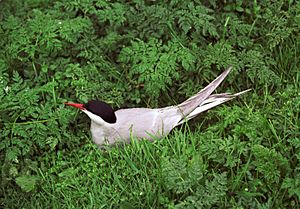 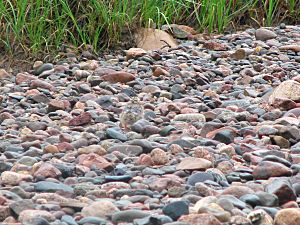 Breeding begins around the third or fourth year. Arctic Terns mate for life, and in most cases, return to the same colony each year. Courtship is elaborate, especially in birds nesting for the first time. Courtship begins with a so-called "high flight", where a female will chase the male to a high altitude and then slowly descend. This display is followed by "fish flights", where the male will offer fish to the female. Courtship on the ground involves strutting with a raised tail and lowered wings. After this, both birds will usually fly and circle each other. 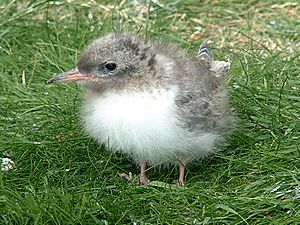 An Arctic Tern chick on the Farne Islands, Northumberland, England.

Both sexes agree on a site for a nest, and both will defend the site. During this time, the male continues to feed the female. Mating occurs shortly after this. Breeding takes place in colonies on coasts, islands and occasionally inland on tundra near water. It often forms mixed flocks with the Common Tern. It lays from one to three eggs per clutch, most often two. 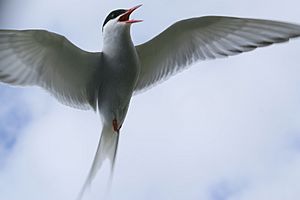 It is one of the most aggressive terns, fiercely defensive of its nest and young. It will attack humans and large predators, usually striking the top or back of the head. Although it is too small to cause serious injury, it is still capable of drawing blood. Other birds can benefit from nesting in an area defended by Arctic Terns. 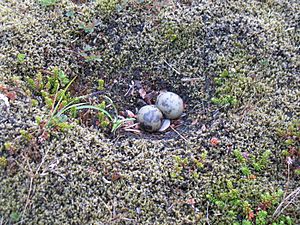 The nest is usually a depression in the ground, which may or may not be lined with bits of grass or similar materials. The eggs are mottled and camouflaged. Both sexes share incubation duties. The young hatch after 22–27 days and fledge after 21–24 days. If the parents are disturbed and flush from the nest frequently the incubation period could be extended to as long as 34 days.

When hatched, the chicks are downy. Neither altricial nor precocial, the chicks begin to move around and explore their surroundings within one to three days after hatching. Usually, they do not stray far from the nest. Chicks are brooded by the adults for the first ten days after hatching. Both parents care for hatchlings. Chick diets always include fish, and parents selectively bring larger prey items to chicks than they eat themselves. Males bring more food than females. Feeding by the parents lasts for roughly a month before being weaned off slowly. After fledging, the juveniles learn to feed themselves, including the difficult method of plunge-diving. They will fly south to winter with the help of their parents.

Arctic Terns are long-lived birds that spend considerable time raising only a few young, and are thus said to be K-selected. The maximum recorded life span for the species is 34 years, although the average lifespan is about 20 years A study in the Farne Islands estimated an annual survival rate of 82%.

The diet of the Arctic Tern varies depending on location and time, but is usually carnivorous. In most cases, it eats small fish or marine crustaceans. Fish species comprise the most important part of the diet, and account for more of the biomass consumed than any other food. Prey species are immature (1–2 year old) shoaling species such as herring, cod, sandlances, and capelin. Among the marine crustaceans eaten are amphipods, crabs and krill. Sometimes, these birds also eat molluscs, marine worms, or berries, and on their northern breeding grounds, insects.

Arctic Terns sometimes dip down to the surface of the water to catch prey close to the surface. They may also chase insects in the air when breeding. It is also thought that Arctic Terns may, in spite of their small size, occasionally engage in kleptoparasitism by swooping at birds so as to startle them into releasing their catches. Several species are targeted—conspecifics, other terns (like the Common Tern), and some auk and grebe species.

While nesting, Arctic Terns are vulnerable to predation by cats and other animals. Besides being a competitor for nesting sites, the larger Herring Gull steals eggs and hatchlings. Camouflaged eggs help prevent this, as do isolated nesting sites. While feeding, skuas, gulls, and other tern species will often harass the birds and steal their food. They often form mixed colonies with other terns, such as Common and Sandwich Terns.

All content from Kiddle encyclopedia articles (including the article images and facts) can be freely used under Attribution-ShareAlike license, unless stated otherwise. Cite this article:
Arctic tern Facts for Kids. Kiddle Encyclopedia.